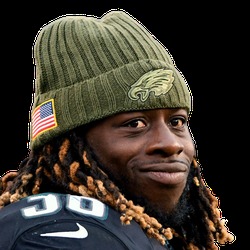 Philadelphia Eagles running back Jay Ajayi is not a fantasy relevant player heading into Week 16. Since signing with the Eagles back before Week 12, Ajayi has received just 10 touches. He went the whole win against Washington last week without recording a statistic. He's simply working as a depth piece and should only see the field in Week 16 in case of injury to one of the players ahead of him on the depth chart. He can safely be dropped in just about every fantasy format.

Philadelphia Eagles running back Jay Ajayi did almost nothing in a Week 14 win over the New York Giants, running the ball just twice for a total of five yards. He saw one target in the passing game, but was unable to come down with a catchable ball. Ajayi has played a very small role on the Eagles offense since being signed, and it has become clear that he is nothing more than depth in the running back room at this point.

Philadelphia Eagles running back Jay Ajayi isn't expected to contribute much and likely won't have a fantasy-relevant role in Week 14. If Jordan Howard (shoulder) is forced to miss another game, rookie Miles Sanders will have a near every-down role in the Eagles backfield. Ajayi has totaled just eight touches since joining the team. Any tiny bit of fantasy value Ajayi may have will be washed away upon Howard's return.

Philadelphia Eagles RB Miles Sanders handled the bulk of the backfield work for the second week in a row when he played 84 percent of the offensive snaps against the Seattle Seahawks Sunday, Nov. 24. Jay Ajayi played a total of nine offensive snaps with Jordan Howard out of the lineup.

Fantasy Spin: Sanders ran for 63 yards on 12 carries and caught three of his five targets for 23 yards but failed to find the end zone for a third straight week. It was much more promising than his last two outings, and he'll be a strong play against the Miami Dolphins this week with or without Howard back in the lineup.

Fantasy Spin: There was talk of a "big role" for Ajayi this week, but it didn't come to fruition. There's no reason to carry him on a roster until the Eagles show he's actually going to have a meaningful role on game day.

Philadelphia Eagles RB Jay Ajayi could have a 'notable role' in Week 12 on Sunday, Nov. 24, especially if fellow RB Jordan Howard (shoulder) misses a second straight game, according to a team beat reporter.

Fantasy Spin: Ajayi didn't play in Week 11, but that was days after being signed off the street. Rookie Miles Sanders' turn as the Philly's lead back didn't net much success (47 yards on 13 total touches) in Sunday's loss to the Patriots, and if Howard does sit out, it sounds like Ajayi would handle most of the Eagles' carries with Sanders reverting back to his pass-catching, change-of-pace role. If Howard is indeed out -- and we likely know for sure until Sunday morning -- throw Ajayi in as a flex/RB2 if you're in late-season need at running back.

Philadelphia Eagles running back Jay Ajayi is likely to have some kind of a role on offense in Week 12. Ajayi was active in Week 11 but never saw the field. He was in uniform despite having signed with the team just two days earlier. With a full week of practice now, Ajayi should see the field for Sunday's matchup against the Seattle Seahawks. How much he plays will depend on whether or not Jordan Howard (shoulder) is cleared to play. Still, Ajayi's role is far too murky to be worth a start in any format, but he should be scooped up from any waiver wires where he's available just in case.

Philadelphia Eagles running back Jay Ajayi, just signed on Friday, was active for Week 11 but did not touch the ball. Rookie Miles Sanders and former special teamer Boston Scott worked out of the Eagles backfield with Jordan Howard (shoulder) inactive. Ajayi will eventually see his role grow, but he'll likely remain behind Sanders and Howard on the depth chart.

Philadelphia Eagles RB Jay Ajayi is expected to make his season debut in Week 11's game against the New England Patriots, according to a source.

Fantasy Spin: Ajayi could see a handful of offensive snaps versus New England but does not possess much fantasy value this week because he is behind RBs Miles Sanders and Boston Scott on the depth chart.

Fantasy Spin: Although Ajayi could play in Week 11 in theory because he should have a good grasp on the playbook, he is almost certainly being added for depth purposes behind Jordan Howard and Miles Sanders and nothing more. Then again, Howard himself is questionable for the game with a stinger, so he could see a few snaps. Barring more injuries to the position group as a whole, however, it's unlikely Ajayi is worth adding in most fantasy leagues at this time.

Free-agent RB Jay Ajayi is expected to re-sign with the Philadelphia Eagles on Friday, Nov. 15. Ajayi worked out for the team Friday morning, and a source said the two sides were deep in contract talks afterward.

Fantasy Spin: Darren Sproles is out of the picture with a quadriceps injury, but the Philly backfield has been set for most of the season with Jordan Howard and rookie Miles Sanders averaging a combined 25.2 touches per game. That leaves little room for Ajayi, who only figures to become a fantasy factor if Howard or Sanders were to miss time with an injury.

Free-agent RB Jay Ajayi (Eagles) will visit the Philadelphia Eagles Friday, Nov. 15, according to a source.

Fantasy Spin: Ajayi played well for the Eagles in 2017, but knee injuries took a toll on his production. If he does return to the Eagles, he won't have any fantasy appeal in a crowded backfield.

Free-agent RB Jay Ajayi (Eagles) is working out for the Detroit Lions on Friday, Nov. 1.

Fantasy Spin: Something to keep an eye on as Kerryon Johnson's knee injury/placement on IR has left the Lions' backfield an unstable mess.

Fantasy Spin: Ajayi has been training and preparing to sign with a team for a few weeks. He's definitely worth stashing in deeper leagues and would be a flex option in the right situation.

Free-agent RB Jay Ajayi (Eagles) is expected to begin working out for teams next week, according to Les Bowen of The Philadelphia Inquirer.

Free-agent RB Jay Ajayi (knee) has informed teams that he is fully recovered from his torn anterior cruciate ligament and is ready to play in games, according to a source.

Free-agent RB Jay Ajayi (knee) might be ready to play in a game next week.