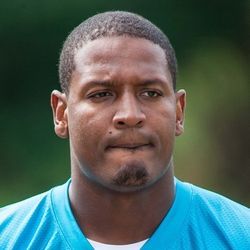 A quad injury kept Dickson out of action early last season but he was able to get on the field Week 8 and made some plays the rest of the way in a reserve role for the Seahawks. He had 12 receptions for 143 yards and three touchdowns. Dickson has fewer than 20 receptions four of the last five seasons. He plays a reserve role these days but can help in that role because of his experience. Dickson is a fairly talented pass catcher at tight end. He has speed to stretch the field and is a pretty good athlete. He runs solid routes and can create mismatches in coverage. Dickson will drop some passes, though, and is just a so-so blocker.

FANTASY OUTLOOK:Â Â  Dickson could get a few more targets this year but probably isn't anything more than a desperation spot play for fantasy teams. His production will be hit or miss. He could get around 20 receptions for 225 yards and a few scores.

Updating a previous report, free-agent TE Ed Dickson's release by the Seattle Seahawks was given a designation of failed physical, according to the NFL's transaction wire Tuesday, March 31. No injury was listed, but Dickson ended the 2019 season on the Reserve/Injured list.

The Seattle Seahawks released tight end Ed Dickson on Tuesday, according to a source. Dickson was due $3 million in 2020, and the Seahawks will save most of that money with his release. The 32-year-old veteran played in just 10 games (one start) in his only season in Seattle, catching 12 passes for 143 yards and three touchdowns. He has had trouble staying healthy in recent seasons and will be, at best, a depth option for another team on the open market. Dickson's release was expected after the team signed Greg Olsen in free agency. They also have Will Dissly and Jacob Hollister returning.

Updating a previous report, Seattle Seahawks TE Ed Dickson was released Tuesday, March 31, according to a source. The move saves Seattle almost $3 million in space against the 2020 salary cap.

The Seattle Seahawks could release tight end Ed Dickson and save $3 million against the salary cap in order to free up some space to sign either defensive end Everson Griffen or Jadeveon Clowney. They could also look to cut safety Tedric Thompson ($2.1 million cap savings) or center Justin Britt ($8.75 million savings). Britt is coming off season-ending knee surgery and Thompson was benched last year. Dickson, 33 this summer, played in just 10 games in 2019 due to injury and made 12 catches for 143 yards and three touchdowns. With Greg Olsen now on the team and Will Dissly and Jacob Hollister also on the depth chart, it might be best anyway for Dickson to find another home.