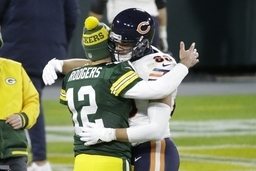 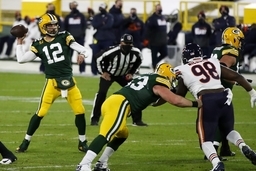 Aaron Rodgers picked apart Chicago's defense once again last week, throwing four TD passes to give him 51 for his career against the Bears.

Only Brett Favre has ever thrown more against the Monsters of the Midway, with 60 in his career. That is one of 16 combinations of a quarterback throwing at least 50 TD passes against one team in the Super Bowl era. Favre also had 58 against the Lions and 54 against the Vikings.

Rodgers has a ways to go if he wants the record against any team, which was set by Dan Marino against the New York Jets with 72 TD passes. Rodgers faces the Bears once more this season and would need 10 more games after that at his current pace of 2.13 TDs per game against Chicago to break Marino's mark.

Marino also threw 54 against the Colts and 50 against the Bills as he picked on his AFC East rivals to give three of those 50-TD careers against one opponent.

Rodgers has also thrown 50 against the Vikings and needs seven more against Detroit to complete the NFC North.

THREE FOR 30 CLUB: Rodgers also topped the 30-TD pass mark this season with the four touchdowns last week giving him a league-leading 33 on the season. That puts him ahead of Russell Wilson (31) and Patrick Mahomes (30) in the first year in NFL history that featured three QBs with at least 30 TD passes through Week 12.

RARE COMPANY: The Cleveland Browns haven't been exactly dominating on their way to an 8-3 record. The Browns have been outscored by 21 points on the season thanks in part to lopsided losses to Baltimore and Pittsburgh and five wins by five or fewer points.

Among the 432 teams in NFL history to win at least eight of their first 11 games (or get at least eight wins in fewer games in shorter seasons), the only other team to do it while being outscored was the 1987 Chargers at a minus-8 point differential. San Diego started 8-1 that season before losing the final six games in a 15-game strike-shortened campaign.

SACKED: Philadelphia quarterback Carson Wentz is having a rough season three years after being an MVP candidate before suffering a season-ending knee injury. Wentz leads the NFL with 19 turnovers and has been sacked a league-high 46 times. The only players since 1996 to lead the NFL in both of those categories are Blake Bortles in 2015 and Jon Kitna in 2006.

SACKER: One of those sacks against Wentz came Monday night from Seattle's Jamal Adams. That gave Adams 6 1/2 on the season, matching the career high he set last year for the Jets. Adams is the first defensive back to have multiple seasons of at least six sacks since it became an official stat in 1982.

PRIME TIME: Russell Wilson got another prime-time win Monday night when Seattle beat Philadelphia 23-17 to improve to 29-8-1 under the lights. Wilson's .776 winning percentage in prime time is the best in NFL history among players with at least 20 starts, beating out Steve Young (.767) and Ken Stabler (.738).

The New York Giants placed starting outside linebacker Kyle Fackrell (calf) on Injured Reserve on Tuesday with a calf injury. Fackrell will miss at least the next three games, leaving the Giants very short-handed at the position. He was tied for second on the team with three sacks and was playing close to 100 percent of the defensive snaps before suffering the injury in the Week 12 win over the Bengals. No outside linebacker on the active roster has more than one sack this year. Linebackers Lorenzo Carter and Oshane Ximines are also on IR. Jamaal Sheard and rookies Carter Coughlin and Cam Brown could start in Week 13 against the Seahawks, making the New York defense one to avoid for fantasy managers after they were a popular streaming defense against Cincy.

The Denver Broncos activated quarterbacks Drew Lock, Brett Rypien and Blake Bortles from the Reserve/COVID-19 list on Tuesday after all three had PCR tests come back negative on Monday. They will all be eligible to play in Week 13 against the Chiefs. So barring additional team discipline, the Broncos won't be forced to use a practice-squad wide receiver under center against their division rivals. If Lock returns as the starter for this offense, it'll be excellent news for receivers Jerry Jeudy, Tim Patrick and K.J. Hamler and tight end Noah Fant. Denver will likely be forced to throw often to keep up with the Chiefs high-octane offense, too, but Lock's inconsistency this season keeps him as a low-end QB2. The 24-year-old was 24-for-40 for 254 yards and two interceptions in the first meeting against KC back in Week 7.

The Atlanta Falcons placed wide receiver Olamide Zaccheaus (toe) on Injured Reserve on Tuesday after he left the Week 12 win over the Raiders with a toe injury. In a corresponding move, the team activated receiver Laquon Treadwell from the Reserve/COVID-19 list and added him to the 53-man roster. Zaccheaus popped up for a couple decent games this year, but it his production was inconsistent on a weekly basis and he was too far down the team's receiving depth chart to be a viable fantasy option in most leagues. The second-year wideout's best game came in Week 9 against the Broncos when he had four receptions for 103 yards and his first touchdown of the season. If he doesn't make it back this year, he'll finish with 20 receptions (32 targets) for 274 yards and the one touchdown. Christian Blake and Brandon Powell could see some more playing time as the No. 4 wideout with Zaccheaus out.

Baltimore Ravens running backs J.K. Dobbins and Mark Ingram II are both eligible to be activated from the Reserve/COVID-19 list prior to the Week 12 game against the Steelers on Wednesday, but it's not a given that either will play. Both players have been isolated since testing positive for the virus on Nov. 22 and aren't allowed to fly on the team plane on Tuesday night. At this point, if you have Dobbins or Ingram on your roster, you've likely benched them for other running backs that already played in Week 12. Even if they both play, Gus Edwards could see the majority of backfield touches and will be the best fantasy play of the trio. Those that picked up Edwards in order to start him this week are hoping that neither Dobbins nor Ingram suit up in the tough matchup against the undefeated Steelers.

The Baltimore Ravens activated defensive tackle Brandon Williams, quarterback Trace McSorley, nickelback Tavon Young and cornerback Khalil Dorsey from the Reserve/COVID-19 list on Tuesday. They could activate more players from the list before kickoff against the Steelers on Wednesday. McSorley should be the backup to Robert Griffin III on Wednesday with Lamar Jackson testing positive for COVID-19 and being unavailable this week. The return of Williams will be good news for Baltimore's defensive line, who will again be without Pro Bowl defensive lineman Calais Campbell. The Ravens Defense is more of a gamble in DFS and season-long leagues against the undefeated Steelers, but inclement weather is expected and could make things tougher on both offenses.

Fantasy Spin: Cook briefly left the Week 12 game against the Carolina Panthers but returned to finish with 83 total yards and 22 touches. He leads the league with 1,385 yards from scrimmage and 14 total touchdowns on the season. The Vikings' schedule gets much tougher following the Week 13 home date against the Jacksonville Jaguars, but he'll remain a matchup-proof RB1 due to his heavy usage.