Cardinals place Molina on IL amid series of roster moves 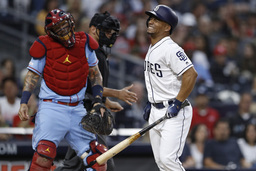 ST. LOUIS (AP) The Cardinals placed catcher Yadier Molina on the injured list with a strained right thumb and activated infielder Matt Carpenter as part of a series of roster moves Thursday.

Molina's move to the IL was retroactive to Monday. The nine-time All-Star, who missed 12 games in May and June with a similar injury, pinch hit on Saturday but hasn't started a game since June 3.

Carpenter has been sidelined since June 29 with a lower back strain.

Shreve appeared in 20 games for the Cardinals last season, and is 2-1 with a 3.80 ERA in 37 games for Memphis this season. Kinzer made his big league debut June 2, going 0 for 7 for St. Louis.