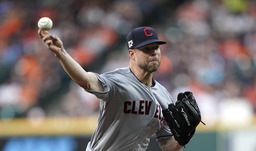 In this April 26, 2019, file photo, Cleveland Indians starting pitcher Corey Kluber throws against the Houston Astros during the first inning of a baseball game in Houston. Klubers broken arm is healing as hoped and he could soon be throwing bullpen sessions. He sustained a fractured ulna when he was struck by a line drive on May 1 in Miami. (AP Photo/David J. Phillip, File)

Kluber was struck by a line drive on May 1 in Miami. Indians manager Terry Francona said Friday the two-time AL Cy Young Award winner had a ''good checkup'' and doctors are now determining when the right-hander can pitch off a mound.

Asked if it could be within weeks, Francona said: ''That's probably a decent guess, estimation.''

Kluber has been able to run and work on his conditioning, and he has been strengthening his arm by playing long toss. Francona said he stretched and threw from 150 feet this week.

The Indians hope Kluber might be able to come back this season. Cleveland also is missing right-hander Carlos Carrasco, who was recently diagnosed with leukemia.