Mets' McNeil goes down with hamstring in loss to Braves 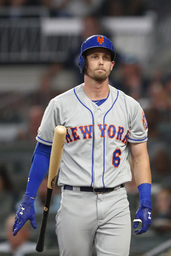 New York Mets' Jeff McNeil reacts after striking out to end the top of the fourth inning of the team's baseball game against the Atlanta Braves on Tuesday, Aug. 13, 2019, in Atlanta. The Braves won 5-3. (AP Photo/John Bazemore) 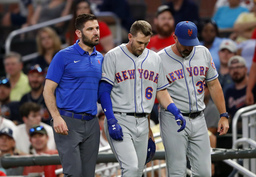 New York Mets' Jeff McNeil (6) is helped off the field by a trainer and manager Mickey Callaway (36) after being injured running out a ground ball during the ninth inning of the team's baseball game against the Atlanta Braves on Tuesday, Aug. 13, 2019, in Atlanta. The Braves won 5-3. (AP Photo/John Bazemore)

ATLANTA (AP) All-Star second baseman Jeff McNeil of the New York Mets had to be helped off the field in the ninth inning Tuesday night after he sustained a hamstring injury while trying to beat out a grounder in a 5-3 loss to the Atlanta Braves.

McNeil says he felt ''a little snag'' in his left hamstring as he approached first base. He slammed down his helmet after crossing the bag in obvious frustration and walked gingerly back to the Mets' dugout, accompanied by a trainer.

An MRI is scheduled for Wednesday morning in Atlanta to determine the seriousness of the injury. McNeil says he hopes it won't be enough to send him to the injured list.

One of the NL's top hitters with a .332 average, McNeil made the All-Star Game for the first time. He has 15 homers and 55 RBIs out of the leadoff spot, helping spark the Mets to a run of 15 wins in 18 games.