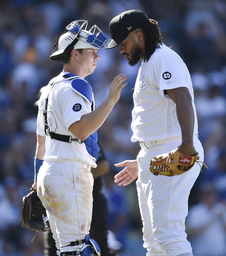 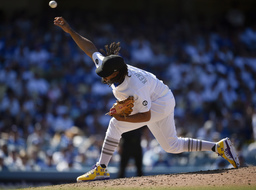 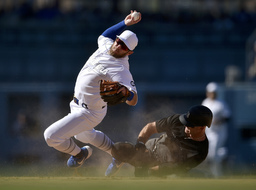 Los Angeles Dodgers second baseman Max Muncy falls while looking to throw to first after New York Yankees' Brett Gardner ran into him, on a grounder hit by Gio Urshela during the ninth inning of a baseball game in Los Angeles, Saturday, Aug. 24, 2019. The Dodgers won 2-1. (AP Photo/Kelvin Kuo) 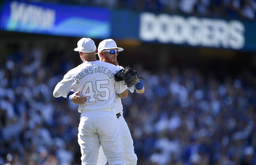 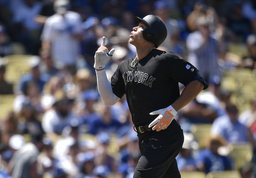 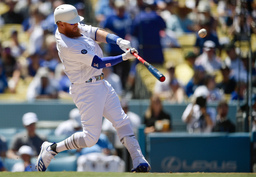 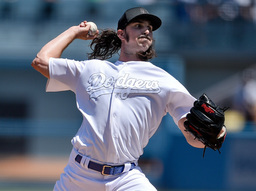 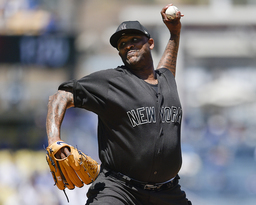 LOS ANGELES (AP) With the sellout crowd at Dodger Stadium hanging on his every pitch, Kenley Jansen found himself in a jam. Bases loaded, one out, and Los Angeles clinging to a one-run lead over the Yankees in the ninth.

All that right after a bizarre twist that had both managers on the field, trying to figure out what happened during a potential game-ending double play that got reviewed.

Jansen stayed cool in the heat of the moment on a scorching day and struck out Mike Tauchman and pinch-hitter Gary Sanchez to give the Dodgers a 2-1 victory over New York on Saturday in a matchup between the teams with the best records in baseball.

''Stressful? No,'' Jansen said. ''Just got to trust yourself in that situation. I don't lose confidence in myself.''

Still, Jansen has faltered at times this season, including earlier in the week when fans booed during his sixth blown save. His 27th save was his first since Aug. 6.

''Kenley showed right there that he can still command the baseball in a big spot and make pitches,'' Dodgers manager Dave Roberts said. ''I definitely don't think that was stress; that was fun.''

But it was the play right before that to load the bases that left most everyone in the ballpark wondering what was going on.

There were runners at first and second with one out when Gio Urshela hit a grounder to third baseman Justin Turner, who looked to start a game-ending double play. Second baseman Max Muncy caught Turner's flip but then got wiped out by Brett Gardner's hard slide for an apparent forceout.

Gleyber Torres, who had started the play on second base, rounded third and then headed home with Muncy down on the ground, trying to score the tying run. Instead, Torres was stopped by the umpires because time had been called.

''Ninth innings are stressful enough as they are,'' Muncy said, ''and you add that in there and it was kind of like, `whew.'''

The strange sequence set off a nearly 2-minute replay review. The call at second was reversed and Gardner was ruled safe, beating the throw with a physical but legal slide.

''For me in terms of playing the game, I thought it was perfectly clean,'' Muncy said. ''In terms of the rule they've created, I thought the only thing that was questionable was his hand reaching out and grabbing me. Other than that, it was a good play by him.''

Muncy said he wasn't injured, but Gardner ''got me pretty good.''

Roberts challenged the slide, believing Gardner was out, while Yankees manager Aaron Boone came out, too, seemingly to seek clarification on why Torres wasn't allowed to score.

''It was a good baseball play,'' Roberts said of Gardner's slide.

''He had definitely started down the line, it didn't seem like halfway to me,'' Boone said of Torres. ''You can see Kenley asking for time maybe about as he's getting ready to start down the line.''

A day after the Yankees routed the Dodgers 10-2, the clubs played a tight game that have some fans predicting will be an October preview.

''Like I told the guys when I was on second base in the last inning, `Good luck the rest of the way and hopefully we'll see you again,''' Gardner said.

Roberts described the atmosphere as ''two great, iconic, storied franchises. You could feel the emotion from both dugouts and the stadium.''

Turner hit a two-run homer in the third. After two games without a homer, the Dodgers got their National League-leading 226th.

Aaron Judge homered for the second straight day, connecting in the fourth.

Gonsolin (2-1) allowed one run and two hits in five innings. Joe Kelly and Pedro Baez kept the Yankees scoreless over the sixth, seventh and eighth.

Sabathia (5-8) gave up two runs and five hits in four innings, striking out seven. It was his second start since coming off the injured list with right knee inflammation.

''Just felt way more comfortable out there and hopefully just continue to build off that,'' Sabathia said.

Turner's 23rd homer of the season landed in the left-field pavilion and scored Gonsolin, who had reached on an infield single off Sabathia's leg for his second career hit.

''I've always been a lifelong Yankees fan,'' said Gonsolin, who met Sabathia in high school. ''It was pretty great to throw against all those guys.''

Judge's drive was New York's 58th homer in August, tying the major league record for most in a month shared by Baltimore in 1987 and Seattle in 1999.

Dodgers: LHP Rich Hill (flexor tendon strain) threw a 27-pitch bullpen session. He'll do it again in a couple days and then face hitters. ... LHP Julio Urias is at the team's spring training facility in Arizona where he threw a bullpen session while serving a 20-game domestic violence suspension. He's set to return on Sept. 3, but the team is unsure whether he will start or work out of the bullpen.