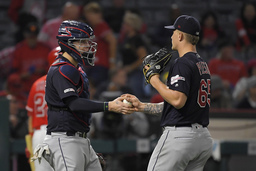 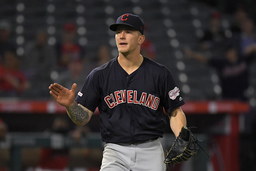 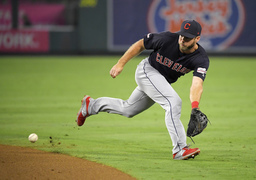 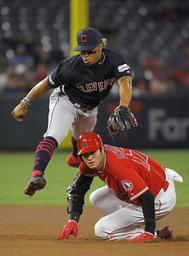 Los Angeles Angels' Shohei Ohtani, right, of Japan, looks back to first after being forced out at second, after Cleveland Indians shortstop Francisco Lindor threw out Justin Upton at first during the fourth inning of a baseball game Tuesday, Sept. 10, 2019, in Anaheim, Calif. (AP Photo/Mark J. Terrill) 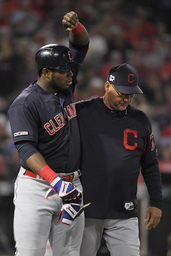 Cleveland Indians' Yasiel Puig, left, is accompanied by manager Terry Francona on the way to first after being hit by a pitch for the second time of the night, during the third inning of the team's baseball game against the Los Angeles Angels on Tuesday, Sept. 10, 2019, in Anaheim, Calif. (AP Photo/Mark J. Terrill) 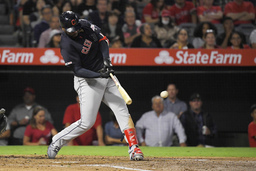 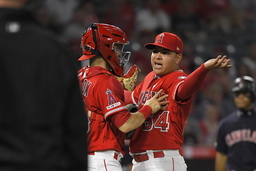 Los Angeles Angels' Jose Suarez, right, is held back by catcher Anthony Bemboom as he yells at Cleveland Indians' Yasiel Puig and manager Terry Francona after Puig was hit by a pitch for the second time of the night, during the third inning of a baseball game Tuesday, Sept. 10, 2019, in Anaheim, Calif. (AP Photo/Mark J. Terrill) 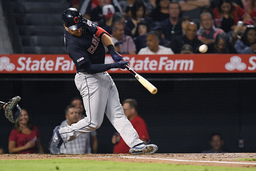 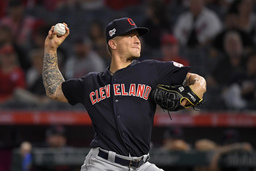 ANAHEIM, Calif. (AP) Corey Kluber is injured, Carlos Carrasco continues to work his way back from leukemia treatment and Trevor Bauer was traded, and still the Cleveland Indians continue to get solid pitching.

Rookie Zach Plesac threw a four-hitter for his first complete game in the majors as the Indians kept pace in the AL playoff race, blanking the Los Angeles Angels 8-0 Tuesday night.

The right-hander is the fifth Cleveland pitcher to toss a shutout this season, which leads the majors. He struck out five and walked two while throwing 114 pitches.

Plesac became the first Indians rookie to throw a shutout since Jeremy Sowers did it twice in 2006.

''After the first inning I was able to settle in,'' said Plesac, who had allowed 10 earned runs in last two starts. ''We had a good game plan and rhythm going.''

''I think every win is important right now no matter if the other team wins or loses. If we have a good month, we will be in the playoffs,'' Lindor said. ''We're on a mission. It's going to be fun.''

The Indians, who have won four of five, also got four RBIs from Franmil Reyes. The Angels, again playing without superstar outfielder Mike Trout, have dropped three in a row - the loss ensured they will miss the postseason for the fifth straight year.

Plesac's previous high in innings was seven on five occasions. It was the sixth time in 19 starts he has thrown over 100 pitches. The most pitches he threw was 20 in the first before he had five innings where he threw 11 or fewer.

''He got behind a couple hitters in the first but the rest of the game he worked ahead and got early outs,'' Cleveland manager Terry Francona said.

Francona thought about taking Plesac out after eight innings, but Plesac told him and pitching coach Carl Willis that he felt good and wanted to go out for the ninth.

Lindor hit his 30th homer, a solo drive off Trevor Cahill in the seventh. Luplow hit a two-run homer off Jose Suarez (2-6) in the second. He drew a bases-loaded walk in the third before Reyes hit a three-run double.

Suarez gave up six runs on four hits in three innings. The left-hander has lost five of his last six starts.

Lindor joined Alex Rodriguez as the only shortstops in major league history to have three or more seasons of at least 30 home runs before turning 26.

His accomplishment might be more noteworthy considering he was injured the first four weeks of the season. A strained calf caused Lindor to miss spring training and then he sprained his ankle during a rehab assignment.

''I'm grateful that I am healthy and I'm not taking anything for granted,'' Lindor said.

Cleveland batters were hit by pitch four times, which is only the 14th time that has happened since 1908.

Indians slugger Yasiel Puig was hit by a pitch from Suarez his first two times up. Puig exchanged words with Suarez while walking up the first base line after he was hit in the foot during the third inning and was restrained by Francona.

It is the first time in Puig's seven-year career that he had been by a pitch twice in a game.

''I thought he handled himself great. I probably got a little more over-excited than he did,'' Francona said. ''I don't think anyone was throwing at anyone.''

Carlos Santana was also hit by a Suarez pitch while Luplow was tagged by a pitch from Cahill. It was the ninth time in Angels history they have hit four batters.

''Clearly, command was an issue tonight. He was trying to do what he did in Oakland by pitching in, but obviously a few went too far in,'' Angels manager Brad Ausmus said of Suarez.

Indians: OF Tyler Naquin has been tentatively scheduled to have surgery on his right knee Thursday after receiving a second opinion in Houston. Naquin tore the ACL in the knee after running into the outfield wall during a game at Tampa Bay on Aug. 30. There still remains some swelling in the knee that could delay the surgery.

Angels: Trout sat out a third straight game after he had a cryoablation procedure to deaden the tissue around the irritated nerve in his right foot.