Thu May 14 12:21pm ET
By RYAN ZIMMERMAN
For The Associated Press 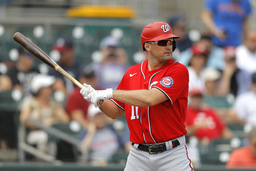 In this March 10, 2020, file photo, Washington Nationals' Ryan Zimmerman waits for a pitch from Miami Marlins pitcher Caleb Smith during the first inning of a spring training baseball game in Jupiter, Fla. With baseball on hold, Zimmerman is offering his thoughts in a diary of sorts. In the seventh installment, he discusses the possibility of the DH rule being added to the NL for 2020 -- and, perhaps, beyond. (AP Photo/Julio Cortez, File) 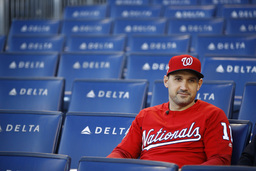 In this Oct. 18, 2019, file photo, Washington Nationals first baseman Ryan Zimmerman sits in the stands as he participates in a television interview after a baseball workout in Washington. Zimmerman is offering his thoughts as told to AP in a diary of sorts while waiting for the 2020 season to begin. (AP Photo/Patrick Semansky, File)

EDITOR’S NOTE: Ryan Zimmerman is a two-time All-Star infielder who has played 15 years in the majors, all with the Washington Nationals. He holds most of the team’s career hitting records, and his two homers and seven RBIs last postseason helped the Nationals win their first World Series championship. With baseball on hold, Zimmerman is offering his thoughts -- as told to AP Sports Writer Howard Fendrich -- in a diary of sorts. In the seventh installment, he discusses the possibility of the

Growing up, I always just thought of the DH as the difference between the two leagues. But I also did have a sense of: “This is silly. Why don’t we all just play by the same rules?”

For me, it’s just a cleaner game with the DH. You know what’s going on. You know the lineup. The pitcher can just worry about pitching.

Over the last five or so years, the idea of a universal DH really gained steam. You’ve seen some pitchers get hurt, whether it’s hitting or running the bases.

Guys like Max Scherzer, Jacob deGrom, Madison Bumgarner -- they still work at hitting. But 95% of the pitchers don’t really even try anymore.

When you look back at the ’90s and early 2000s, pitchers took a lot of pride in it. They got the bunts down. Some of them could hit-and-run pretty regularly. “Pitchers who hit” was actually a part of the game.

Now, I feel like, a majority of the time that spot’s an out. And when they’re supposed to be advancing runners, it looks like not many of them really even care anymore. If you really watch the games in the NL, most pitchers don’t even really want to be up there.

No one comes to the field to watch pitchers bunt or hit. At least I don’t think they do. I’d much rather see those guys throw eight shutout innings than lay a bunt down -- especially when the other team is just going to intentionally walk the next guy to set up a double play, anyway.

I guess I’ve probably changed on the DH rule a little bit. Coming up, being a defensive player, I took so much pride in the way I played defense. My whole life and the beginning of my career, I almost thought of myself as more of a defensive player, and then the offense sort of came as I got older and more mature -- to the point that now I’m pretty proud of what I’ve done at the plate in the big leagues.

Also, with all the new thoughts and worries about time of game, for all the talk that the DH adds time to AL games, I actually think their games run smoother. In the NL, if the pitcher makes the last out of an inning, or a pitcher is on second base when the last out is made, I feel like some pitchers take five minutes to get back out there to the mound.

I know the counter-argument is the NL has so much more strategy with double-switches, and you need to worry about if you want to leave your pitcher in for an extra inning, maybe, if he’s up to 90 pitches and he’s doing well but you’re down one run and have the bases loaded in the sixth inning: “Do you pinch-hit for the pitcher?” I get that aspect of it, as well.

But if there’s a DH rule, all the pitchers need to worry about is pitching.

If I’m a fan, I’d rather watch Max Scherzer pitch and someone else hit.