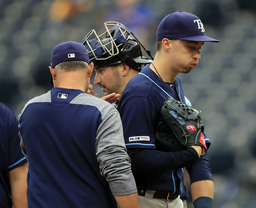 In this May 1, 2019, file photo, Tampa Bay Rays starting pitcher Blake Snell, right, is taken out by manager Kevin Cash, left, during the fourth inning of a baseball game against the Kansas City Royals at Kauffman Stadium in Kansas City, Mo. Rays All-Star pitcher Blake Snell says he will not take the mound this year if his pay is cut further, proclaiming: Im not playing unless I get mine. the 2018 AL Cy Young Award winner said on a Twitch stream Wednesday, May 14 2020. (AP Photo/Orlin Wagner, File) 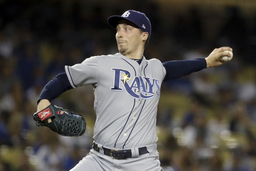 In this Sept. 17, 2019, file photo, Tampa Bay Rays starting pitcher Blake Snell throws to a Los Angeles Dodgers batter during the first inning of a baseball game in Los Angeles. Rays All-Star pitcher Blake Snell says he will not take the mound this year if his pay is cut further, proclaiming: Im not playing unless I get mine. the 2018 AL Cy Young Award winner said on a Twitch stream Wednesday, May 14 2020. (AP Photo/Chris Carlson, File)

I’m not really sure what Twitch is, but I do know this - Blake Snell will wish he was never on it.

He said on the social gaming site what a lot of Major League Baseball players are probably thinking. Like him, they’re anxious about risking their health by returning to play and not happy they have to take a pay cut to do so.

But after a rant as ill-advised as it was tone-deaf, Snell is now the poster child for spoiled millionaire ballplayers everywhere.

And, really, let’s face it. He deserves all the vitriol coming his way.

``I’m not playing unless I get mine,’’ Snell proclaimed, saying he would sit out any resumed season if his $7 million pay is cut too much. He said other things, too, but his main point seemed to be that even a pandemic shouldn’t spoil the riches he so richly deserves.

Well, maybe not 100 percent, but let’s try and cut the 27-year-old Snell some slack. Maybe he’s been playing video games so much he hasn’t had time to pick up a newspaper or watch the news on TV.

He might not have seen the headlines that 36.5 million Americans have filed for unemployment in the last eight weeks, or the poll that shows 46 percent without jobs are worried they will not have enough food to make it through the end of the month.

And maybe he didn’t peek into his bank account and notice that $286,500 has already been deposited there for this season without throwing a pitch. He’s also scheduled to get $43,210 for each day - yes, each day - of the schedule should the season resume.

No, it’s not the $7 million he signed up for. But that was silly money even before the virus began spreading across the country.

The bottom line is there’s going to be a new reality when sports resume and the real costs of the pandemic become known. Guarantees that players had in the past aren’t as solid anymore and it’s anyone’s guess how it all plays out economically.

Without fans in the stand, MLB signaled this week it wants to split revenues with players on an 82-game season as a way of reducing the risk of big losses. That idea was essentially branded a non-starter by the players’ union, which has always been quick to dig its heels in whenever the golden goose seemed threatened.

The revenue split may not fly as presented, and that’s fine. There might be better ideas that make financial sense for both the leagues and the players - and they should both feel the pain equally.

But what Snell and the players’ union don’t seem to get is that they’ll have to compromise in some way if there is to be any hope of a season this year. What they also don’t seem to get is no one wants to hear any complaining about having to take smaller paychecks to make it happen.

Illinois Gov. J.B. Pritzker made that point this week, saying that while players have a right to bargain he’s disappointed they’re holding out for ``very, very high salaries and payments during a time when I think everybody is sacrificing.’’

Pritzker walked back his comments a day later, saying players have a right to protect their health and safety. They do, and they should have an option to sit out the season with no penalty - and no pay - if they feel threatened by playing while the virus is still active.

But Snell seemed to attach a price tag to his comfort level, saying he shouldn’t have to take a risk at the same time he’s taking a pay cut. And that’s just wrong, especially coming from a player who is due $39 million guaranteed over the next three years once baseball comes back.

That’s money ICU nurses can never hope to make as they go about saving lives every day. It’s money not even imaginable to grocery store clerks who risk being infected every time they go to work just so we can all eat.

Go ahead, sit the season out or play if you want. But don’t whine about having to make sacrifices to do it.

America is hurting too much right now to listen.