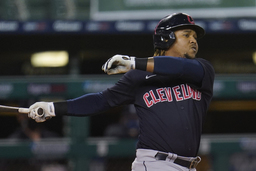 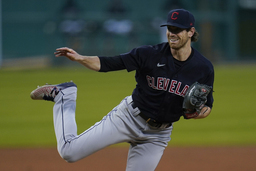 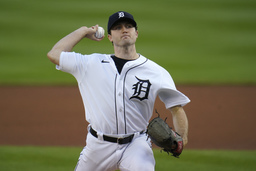 Bieber took a shutout into the eighth inning, Jose Ramirez homered twice on his 28th birthday and the Indians beat the Detroit Tigers 10-3 on Thursday night. Cleveland snapped an eight-game losing streak.

The Indians entered the day holding the final American League playoff spot, and they had a four-game cushion despite their recent slide.

''Going into the postseason, it would be nice to get some momentum moving forward,'' Bieber said. ''A lot of good teams make it, but a lot of hot teams win it, so if we can get going towards the end of the season right now, I think we'll be in a good spot.''

Bieber (8-1) didn't allow a run until his final hitter, Willi Castro, hit a three-run homer in the eighth. That cost the Cleveland right-hander the major league ERA lead, but Bieber did become the first eight-game winner of this shortened season. He allowed four hits in 7 2/3 innings.

Bieber, a leading candidate for his first AL Cy Young Award, struck out 10 to raise his season total to 112, baseball's top mark. He walked two.

''It was a tough night. We faced a very good pitcher, we all saw that,'' Detroit manager Ron Gardenhire said. ''The guy was phenomenal. He had great stuff and didn't give us much early in the game.''

Casey Mize (0-2) allowed three earned runs in 3 2/3 innings for Detroit. The rookie right-hander took a no-hitter into the sixth inning of his previous start, but he had a tougher time against Cleveland.

Ramirez opened the scoring with a solo homer in the first and added a two-run shot in the fourth. The Indians then scored two more runs off Mize in the fourth, both of them unearned. Third baseman Isaac Paredes flubbed a two-out, bases-loaded grounder for an error. Then Mize walked in a run to make it 5-0.

Cleveland scored three in the seventh, including a two-run single by Franmil Reyes. Cesar Hernandez hit an RBI double in the eighth, and Ramirez capped his four-hit night with an RBI single later that inning.

''We've been playing hard,'' Ramirez said through a translator. ''This is baseball. You can go on a streak of winning 20-something games, but also lose 15-something games.''

Bieber's outing ended on a sour note after he was left in with a 10-run lead in the eighth. He struggled in the inning and ended up with a career-high 118 pitches. Castro's homer raised Bieber's ERA to 1.74, just behind former teammate Trevor Bauer of Cincinnati at 1.71.

But Bieber accomplished the night's big objective - ending Cleveland's losing streak. He has at least eight strikeouts in all 11 starts this year, the second-longest streak to start a season in major league history. Randy Johnson had a 15-game run in 2000.

Detroit has lost five of six.

Jordan Zimmermann came on in the seventh for just the second relief appearance of his career. He allowed five runs in 1 2/3 innings.

Tigers: C Austin Romine took a foul ball off the leg in the ninth but was able to stay in the game. ... Detroit optioned OF Travis Demeritte to the alternate training site after the game, and the Tigers said UTIL Harold Castro (left hamstring strain) will be reinstated from the injured list before Friday's game.

Zach Plesac (3-2) takes the mound for Cleveland on Friday night against Michael Fulmer (0-2).