Rays OF Meadows placed on injured list; could miss playoffs 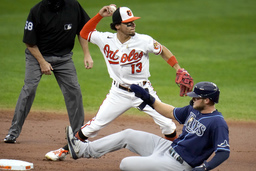 BALTIMORE (AP) Tampa Bay Rays outfielder Austin Meadows was placed on the 10-day injured list Friday with an oblique strain that will keep him sidelined into the postseason.

The injury occurred while Meadows took a swing in the opener of Thursday's doubleheader against the Orioles. The Rays won both games to earn a berth in the AL playoffs, and they'll need a deep run to get Meadows back in the lineup.

''We're going to have to play really, really well to see him at any point the rest of the season,'' manager Kevin Cash said.

''I don't need to talk about how important Austin is,'' Cash said.

To fill the roster spot, Tampa Bay selected left-hander Sean Gilmartin from its alternate site. In order to add Gilmartin to the 40-man roster, the Rays transferred pitcher Cody Reed (left pinky irritation) to the 45-day IL, ending his season.

Reed pitched in two games for the Rays after he was acquired in a trade with the Reds on Aug. 28. He was placed on the 10-day IL on Sept. 10, retroactive to Sept. 7.

''Cody went and saw a doctor today and he's going to miss some significant time,'' Cash said. ''It appears to be a numbness issue in parts of his hand and fingers. It's unfortunate because we acquired Cody with high hopes.''

Although Cash and the Rays are focused on winning the AL East, the manager said he will attempt to shuffle his lineup because of the loss of Meadows.

''We'll probably take this opportunity over the next eight, nine games to find out how we want to go about with lineup construction,'' Cash said before Friday's game against the Orioles. ''We'll find a way to get creative.''