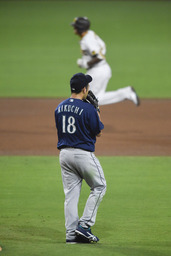 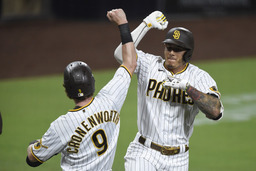 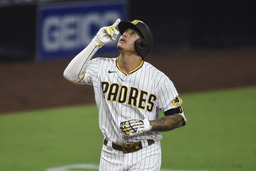 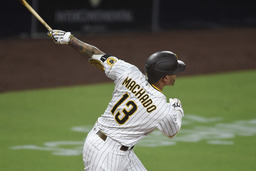 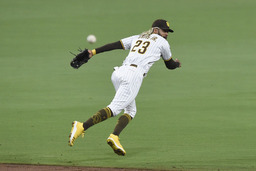 San Diego Padres shortstop Fernando Tatis Jr. throws to first base on a single hit by Seattle Mariners' Evan White during the third inning of a baseball game Friday, Sept. 18, 2020, in San Diego. White was safe at first base. (AP Photo/Denis Poroy) 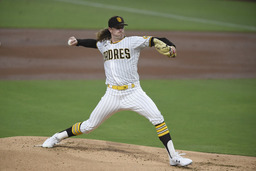 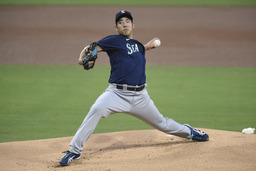 SAN DIEGO (AP) While Fernando Tatis Jr. cools down, Manny Machado is heating up as the San Diego Padres close in on their first playoff berth in 14 seasons.

Machado homered twice and drove in four runs, Chris Paddack one-hit Seattle for six shutout innings and the Padres beat the Mariners 6-1 Friday night to reduce their magic number to two for their first playoff berth since winning the NL West in 2006. They've already clinched their first winning season since 2010. The Mariners' loss helped the Oakland Athletics clinch their third straight playoff berth.

The Padres won the opener of a three-game series that was moved from Seattle because of poor air quality due to wildfires. The Padres batted first but wore their home white pinstripes.

Machado, who joined the Padres prior to the 2019 season under a $300 million, 10-year contract, said he's more driven by a playoff berth than anything else.

''We set a goal during the COVID summer camp and we're about to reach that goal and we're still not done with that,'' he said. ''Our mindset in here is we're going to keep grinding and we're going to keep playing baseball until we reach that goal. It's going to be fun to finally clinch a postseason spot, which hasn't been done for a very long time in the organization. Our mindset is still further on down the road. It's a moment.''

Machado has jumped into the NL MVP conversation, which Tatis had dominated earlier this season with his exciting play.

Again, Machado deflected talk away from himself.

''My mindset is just going out and winning that ballgame today,'' Machado said. ''We have a great team here, we have 28 MVPs on our ballclub, if it's up to me. We've all been doing our job, we've all been passing the baton. We've been doing what we need to do to win ballgames every single night. That's special to watch and that's something special that we've been doing here all year.''

While Machado stayed hot with a multi-homer game that gave him 16 for the season - tied for the NL lead with Mookie Betts of the Dodgers - as well as 45 RBIs, Tatis remained mired in a slump. He went 0 for 4 with a walk and three strikeouts. He's gone hitless in three straight games for the first time in his career and is 2 for 31 in his last nine games, with his average dropping from .314 to .275.

''I keep telling him, just keep playing the game,'' Machado said. ''At the end of the day it's about winning games and the team. Better him going through it right now. He'll break out of it soon.''

Paddack (4-4) was brilliant in bouncing back from his last start, when he left after just two innings due to a sprained ankle. He allowed only a single to Evan White leading off the third while striking out three and walking two.

Machado hit a three-run homer off left-hander Yusei Kikuchi (2-4) to deep left-center with two outs in the fourth. Rookie Jake Cronenworth was aboard on a walk and Trent Grisham on an RBI fielder's choice.

After Tatis walked and was thrown out trying to steal second for the second out of the ninth, Machado homered to left-center off Walker Lockett.

The Padres scored a run in the third without benefit of a hit. Grisham and Machado walked, executed a double steal and Grisham scored on a wild pitch.

Paddack induced 11 groundball outs. Catcher Austin Nola was obtained from Seattle just before the trade deadline, and Paddack said he leaned on his knowledge of his former teammates.

''My biggest goal was to establish the fastball down,'' Paddack said. ''I wanted to be the aggressor tonight and I attacked the zone. I taught myself something tonight: If I make pitches and I can be efficient for 90 pitches and not take a pitch off, it's going to be a good night.''

''I thought we were gonna be in great shape tonight,'' Seattle manager Scott Servais said. ''The command issues got him, the walks and you look at all that. He had Machado I think on an 0-2 count before he made a mistake on a 2-2 breaking ball and we're down five runs.

''Disappointing outing for Yusei. Out of whack mechanically. He kept missing his fastballs, pulling them tonight, something we hadn't seen before. He really out of sync mechanically.''''

Seattle's Evan White homered off Pierce Johnson with one out in the eighth, his sixth.

Padres: Activated Tommy Pham from the 10-day IL and optioned Jorge Ona to the alternate training site. Pham had been out since fracturing his left hamate bone on Aug. 16 and had surgery. He started at DH.

Mariners: LHP Justus Sheffield (3-3, 4.06 ERA) is scheduled to make his ninth start of the season on Saturday night and his first career start against San Diego.

Padres: RHP Mike Clevinger (3-2, 3.10) is scheduled to make his fourth start since coming over from Cleveland in a blockbuster trade on Aug. 31.