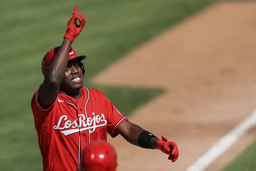 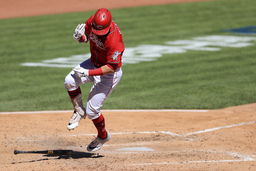 Cincinnati Reds' Jesse Winker reacts to being hit on the hand by a pitch from Chicago White Sox' Ross Detwiler in the fourth inning during a baseball in Cincinnati, Sunday, Sept. 20, 2020. (AP Photo/Aaron Doster) 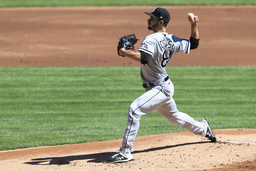 CINCINNATI (AP) Mike Moustakas hit a two-run single as Cincinnati scored five times in the fourth inning on just one hit, and the Reds took advantage of wild Chicago White Sox pitching for a 7-3 win Sunday.

Aristides Aquino hit a two-run homer as the surging Reds stayed in contention for a playoff spot, taking two out of three from the the AL Central leaders for their seventh win in eight games.

''It is a good accomplishment any time you can take two of three from a good team,'' Reds manager David Bell said.

Cincinnati broke away by turning six walks, a hit batter and Moustakas' single into a big inning. The playoff-bound White Sox issued a season-high 11 walks and hit three batters overall.

''Today was very odd,'' Chicago manager Rick Renteria said. ''Thankfully, we haven't had many of these - just one hit in that particular inning when they scored five runs. We thought, ultimately, we could try to chip away a little bit and get to the bullpen and do something. Frustrating? A little bit. We're trying to move forward in a positive way. We'll throw this one in the garbage and move on.''

Chicago starter Dylan Cease (5-3) was pulled after walking the bases loaded with no outs in the fourth. At that point, he hadn't allowed a run or hit, but had walked a career-worst seven and struck out five.

''I was yanking my fastball today,'' Cease said. ''Not having a feel for my fastball is what did me in. At the end of the day, the misses were all the same, so I have to figure out what my adjustment is for my yanks.''

Two runs scored on infield outs and another came home on a bases-loaded walk before the left-handed hitting Moustakas singled off lefty reliever Ross Detwiler for Cincinnati's first hit.

''Each run is so important against any team, but especially this team,'' Bell said. ''It was a great piece of hitting by Moustakas.''

The White Sox scored on back-to-back RBI singles by Nick Madrigal and Jose Abreu in the fifth.

Aquino answered with an upper-deck drive to left. He celebrated his second homer with his trademark right arm flex as he rounded third.

Reds starter Michael Lorenzen struck out a career-high eight in 4 2-3 innings. He allowed two runs on two hits and two walks. He was disappointed he didn't respond well to the lengthy bottom of the fourth.

''It felt like it was the longest game in the history of baseball,'' Lorenzen said. ''I think I handled it pretty well. It was my goal to get them out as fast as possible, but I wasn't able to do it, so I will learn from it.''

Lucas Sims (3-0) pitched 2 1-3 innings to get the win. He struck out the top three batters in Chicago's lineup, including Abreu in an 11-pitch at bat to end the seventh, after walking the first two batters.

''That battle with Abreu was big,'' Bell said. ''He stayed with it. That was a big out right there.''

Former Reds star Edwin Encarnacion lined an opposite-field homer into the right field seats for his 10th homer of the season in the eighth.

Joey Votto's three walks boosted him past Pete Rose for the franchise career walks record with 1,211.

Cincinnati's Brian Goodwin was ejected by plate umpire Mike Estabrook for arguing after he struck out to end the fourth. The ejection was the first of Goodwin's career.

Abreu's RBI was his major league-leading 53rd in Chicago's 53 games this season.

White Sox: Tim Anderson left the game with cramping in his left hamstring one pitch into his seventh inning at-bat.

Reds: Freddy Galvis was hit by a pitch to load the bases with two outs in the second inning. Galvis has been hit by pitches a team-high six times this season.

Reds: RHP Luis Castillo (3-5) is 3-5 in 10 career starts against Milwaukee, including 1-3 in five starts over the past two seasons.