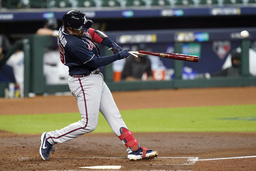 After playing for three teams in 2019, Travis d'Arnaud felt sure he'd found a home when he signed with the Atlanta Braves last winter.

Turns out, the fit was just right for d'Arnaud to deliver a postseason to remember.

After homering in each of the first two games of the NL Division Series, d'Arnaud hit a two-run double in Atlanta's four-run third inning on Thursday that helped give the Braves a 7-0 win over the Miami Marlins and a three-game sweep of the series.

D'Arnaud was 6 for 10 with two homers, two doubles and seven RBIs - the most by a catcher in a division series.

He hit a high fastball from Sixto Sanchez off the fence in right-center for the two-run double.

''That was like old school right there, just tomahawking the ball,'' Braves manager Brian Snitker said. ''He just put an old-school hack on that thing.''

Asked how he stayed on top of the high pitch, d'Arnaud said ''I'm still wondering, too. I just tried to put the barrel on the ball. I got rewarded with a double that scored two runs.''

With d'Arnaud behind the plate, Kyle Wright led the Braves staff to its fourth shutout of the postseason. Wright threw six innings, allowing only three hits but having to pitch out of trouble early in the game.

Though d'Arnaud's hits were big, he said he was most proud of Wright.

''The performance of the young kid, what he did, what he battled through when he didn't have his best stuff,'' d'Arnaud said.

D'Arnaud earned praise from Snitker for helping Atlanta's young starters. Max Fried, Ian Anderson and Wright become a postseason strength when the inexperience of the staff looked like the weak spot of the team.

''I can't say enough about that guy,'' Snitker said of d'Arnaud. ''He's just been unbelievable for us with the big hits, and the hits overshadow the big job he did for us with those pitchers.''

It would have been difficult to predict d'Arnaud hitting cleanup in the 2020 postseason when he was cut by the New York Mets early in 2019 and then sold by the Dodgers for $100,000 to the Tampa Bay Rays.

It wasn't fun to be cut and have his contract sold, but d'Arnaud said he focused on knowing other teams still believed he could play.

''It made me feel like I was doing something right, something was right in my mindset,'' d'Arnaud said. ''I just had to keep continuing to do that and keep moving forward.''

He didn't have to strain to learn about the organization - his brother, Chase d'Arnaud, was with Atlanta in 2016 and '17. Travis said he knew the Braves had potential to make a postseason run.

''Absolutely. I knew that this organization had it in them,'' d'Arnaud said. ''I knew playing against them, I was not going to bed until about 5 a.m. because I was worried about the next day. Now I can sleep a little better at night knowing that I'm on that team. To be a part of it and to see what truly happens behind closed doors and in the locker room is magical and I'm thankful to be a part of it.''

D'Arnaud hit .321 with nine homers in the shortened season while sharing time with Tyler Flowers.

''That's my pick for the Silver Slugger as a catcher,'' Freddie Freeman said of d'Arnaud. ''I don't know if you can have a better season then he did, and coming up clutch, too.''