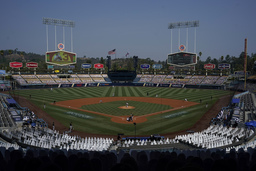 LOS ANGELES (AP) Los Angeles Dodgers fans who can't get to Texas for the NL Championship Series can watch their team from their cars outside Dodger Stadium.

The team is hosting viewing parties for the best-of-seven series against the Atlanta Braves that begins Monday at neutral-site Globe Life Stadium in Arlington, Texas. Tickets costing $75 per car went on sale Friday night and must be purchased in advance.

The games will be shown on 60-foot screens in two sections of the stadium's vast parking lots, with audio broadcast through an FM radio transmitter. Concessions won't be sold, so fans are allowed to bring their own food and non-alcoholic beverages.

''We wish we could be playing in front of 56,000 fans at Dodger Stadium Monday, but we're excited that the Dodgers have created a safe way for the community to come together and hopefully cheer us on to the World Series,'' manager Dave Roberts said.