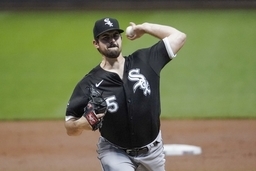 The White Sox also announced they had reached a one-year deal with reliever Jace Fry worth $862,500. The 27-year-old Fry went 0-1 with a 3.66 ERA in 18 appearances with the team during the pandemic-shortened season.

Rodon was selected by Chicago with the No. 3 overall pick in the 2014 amateur draft. He broke into the majors the following year and looked as if he could be a key member of the team's rotation for years to come before he was hampered by a series of injuries.

Mazara was acquired in a trade with Texas in December 2019 for minor league outfielder Steele Walker. The 25-year-old slugger was expected to fill Chicago's hole in right, but he hit just .228 with one homer in 42 games this year.

Wednesday was the deadline for major league teams to offer contracts to unsigned players on 40-man rosters.

''A great deal of consideration and analysis goes into our decisions to forego the arbitration process and instead engage with players and their representatives as free agents,'' White Sox general manager Rick Hahn said in a release. ''We plan to stay in contact with both Nomar and Carlos and evaluate their possible fit with our club as we move forward through the offseason.''

Fry has turned into a valuable lefty in Chicago's bullpen, holding left-handed batters to a .184 batting average for his career. He is 5-8 with a 4.75 ERA in 156 games over four seasons, all with the White Sox.