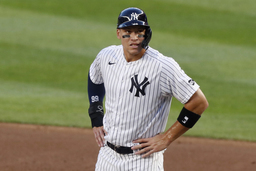 NEW YORK (AP) Slugging outfielder Aaron Judge and the New York Yankees avoided arbitration when they agreed Friday to a one-year contract worth $10,175,000.

Judge had his third straight injury-interrupted season since winning the 2017 AL Rookie of the Year award, hitting .257 with nine homers and 22 RBIs in 101 at-bats and 28 games. After homering in his first five games, he strained his right calf and played just once between Aug. 11 and Sept. 16.

The two-time All-Star was limited to 112 games in 2018 by a broken bone in his right wrist when by hit by a pitch from Kansas City's Jakob Junis and to 102 games in 2019 by a strained oblique muscle.