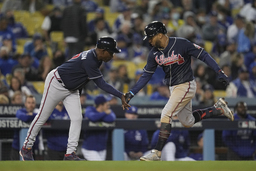 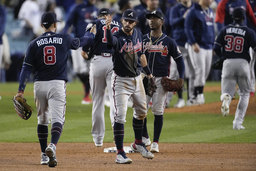 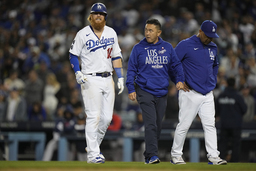 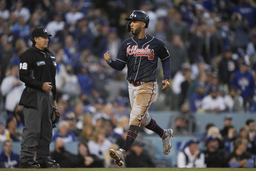 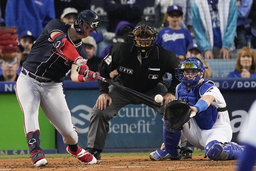 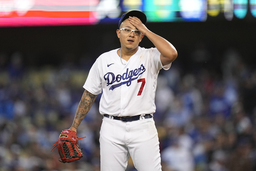 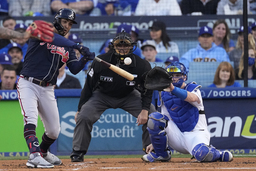 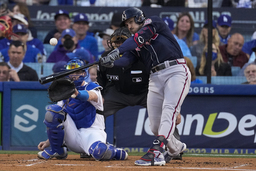 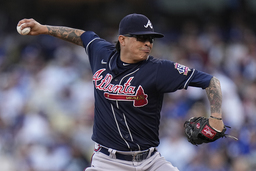 LOS ANGELES (AP) Behind the red-hot bat of Eddie Rosario, the Atlanta Braves are one win away from their first World Series appearance since 1999.

All they need to do is put away the defending champion Los Angeles Dodgers.

After all, the Braves were in exactly the same position last year and failed to finish the job.

Rosario homered twice in his second four-hit game of the NL Championship Series and six Atlanta pitchers combined on a four-hitter, giving the Braves a 9-2 victory Wednesday for a commanding 3-1 lead in the best-of-seven playoff.

Game 5 is Thursday in Los Angeles. Last year, the Dodgers also trailed 0-2 and 1-3 against Atlanta in the NLCS before roaring back to win three straight games at a neutral site in Arlington, Texas.

''As we saw last year, winning a game is hard, especially a veteran team like this that we're playing,'' Braves manager Brian Snitker said. ''But I feel good about our club just from what we experienced last year and where these guys are.''

Adam Duvall and Freddie Freeman also homered for the Braves, who bounced right back from blowing a late lead in an agonizing loss Tuesday to end their 10-game skid at Dodger Stadium.

''I feel like everyone has really hunkered down and dug their heels in and everyone is really focused,'' Rosario said through a translator. ''That's something that I'm really proud to be a part of.''

Rosario became the first player to have two four-hit games in a League Championship Series. He drove in four runs and scored three while continuing his torrid postseason hitting, finishing a double short of the cycle. He homered in the second inning, tripled in the third, singled in the fifth and clocked a three-run homer in the ninth.

''As soon as I hit that first home run I just thought to myself, `Wow, I feel amazing right now,''' Rosario said, ''so I kind of just carried that confidence into my other at-bats going forward.''

''I've been using that bat that I hit for the cycle with and it has not disappointed. I had that double remaining and I'm like, `Man, this bat has not let me down yet,''' he said. ''As soon as I hit that second one out, I go, `Oh well, there goes the double.'''

The Dodgers will need to jump-start their offense to have a shot at another NLCS comeback. Their first five hitters - Mookie Betts, Corey Seager, NL batting champion Trea Turner, Will Smith and Gavin Lux - were a combined 0 for 17 in Game 4.

Los Angeles, which had won 18 of 19 at home going back to the regular season, has won six consecutive postseason elimination games dating to last year.

''I feel good about it,'' manager Dave Roberts said. ''We have a very resilient team, a very tough team, and it's not going to get much tougher than facing Max Fried in an elimination game, but we've done it before.''

Rosario was acquired from Cleveland on July 30 as the Braves remade their depleted outfield before the trade deadline.

What a find he's been.

The left fielder has hit safely in every game this postseason, piling up 14 hits in 30 at-bats (.467) - including a walk-off single in Game 2 against the Dodgers.

''He's been looking so good at the plate, hitting balls hard,'' Freeman said.

Each of the series' first three games was decided by one run in the last two innings. But when it got late this time, the wild-card Dodgers couldn't generate any comeback magic.

Atlanta opener Jesse Chavez combined with Drew Smyly, Chris Martin, A.J. Minter, Tyler Matzek and Will Smith to hold down the Dodgers' offense. Los Angeles didn't get a hit until the fifth and was limited to one the rest of the way. Smyly went 3 1/3 innings for the win.

The Braves wasted no time jumping all over 20-game winner Julio Urias, who gave up three homers in 2 2/3 innings. It was the second time he allowed that many in his career; the first time was in his second major league game in 2016.

Rosario drove an 0-2 pitch into the left-field pavilion leading off the second and Duvall followed with a shot to center, the first time the Braves homered back-to-back in the postseason since Oct. 3, 2002, against San Francisco in Game 2 of a Division Series.

''He kind of smiled at me after he hit it in there just because it was one of those things where it just, a hot hitter and he kind of knows where he's going,'' Urias said through a translator.

Duvall was intentionally walked and Joc Pederson singled, scoring Rosario for a 4-0 lead against Urias.

The Dodgers, who won 106 games during the regular season, closed to 5-2 in the fifth on pinch-hitter AJ Pollock's two-out, two-run single. Justin Turner singled for their first hit of the game and Cody Bellinger followed with a single and stolen base.

Freeman's RBI double in the ninth made it 6-2 before Rosario went deep.

Urias didn't record a strikeout until the fourth, when Dansby Swanson and Freeman went down swinging back-to-back to end the left-hander's first clean inning. Urias gave up five runs and eight hits in five innings. He struck out three and walked three.

The only other player with a pair of four-hit games in a postseason series was Milwaukee Brewers Hall of Famer Robin Yount in the 1982 World Series against St. Louis.

Braves: RHP Huascar Ynoa was scratched from his scheduled start with shoulder inflammation. He was replaced on the roster by left-hander Dylan Lee. Ynoa is not eligible to return for the World Series, if the Braves advance.

Dodgers: Justin Turner is done for the season after injuring his hamstring in the seventh, Roberts said. Turner screamed as he was retired on a double-play ball. He limped off the field and was replaced in the eighth.

Fried starts Game 5 for the Braves in his Los Angeles hometown. The Dodgers planned a bullpen game, a strategy they've used twice this postseason, going 1-1 in those games.