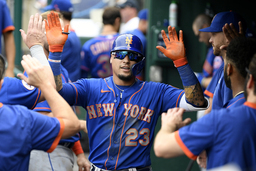 New York Mets' Javier Baez celebrates his home run in the dugout during the third inning of a baseball game against the Washington Nationals, Sunday, Sept. 5, 2021, in Washington. Javier Baez is nearing a $140 million, six-year contract with Detroit, giving the Tigers a dynamic bat for the middle of their order. Baez, who turns 29 on Wednesday, hit .265 with 31 homers and 87 RBIs in 138 games with the Cubs and Mets last season. A person with direct knowledge of the situation confirmed the deal to The Associated Press on Tuesday, Nov. 30, on condition of anonymity because the contract had not been finalized. (AP Photo/Nick Wass, File) 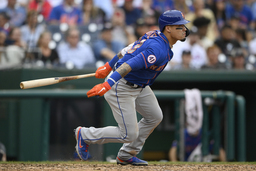 New York Mets' Javier Baez bats during a baseball game against the Washington Nationals, Sunday, Sept. 5, 2021, in Washington. Javier Baez is nearing a $140 million, six-year contract with Detroit, giving the Tigers a dynamic bat for the middle of their order. Baez, who turns 29 on Wednesday, hit .265 with 31 homers and 87 RBIs in 138 games with the Cubs and Mets last season. A person with direct knowledge of the situation confirmed the deal to The Associated Press on Tuesday, Nov. 30, on condition of anonymity because the contract had not been finalized. (AP Photo/Nick Wass, File)

DETROIT (AP) Javier Baez hopes he's a big part of a turnaround with the Detroit Tigers, too.

Baez celebrated his 29th birthday Wednesday by signing a $140 million, six-year contact to play shortstop for the revitalized Tigers.

''This is a turning point for the Tigers undoubtedly, signing a player like Javy. I think sends a message to the baseball world, to our fans, that the Tigers are here to compete,'' CEO Christopher Ilitch said.

Baez said the prime attractions were playing with Tigers star Miguel Cabrera and being part of a team possibly on the cusp of rising from the far back, much like the Chicago Cubs did in his early seasons before winning the 2016 World Series.

Baez is both flashy and effective with his glove, winning a Gold Glove in 2020. He batted a combined .265 with 31 homers and 87 RBIs this year for the New York Mets and Cubs, who traded him July 30. He also led the National League with 184 strikeouts, and stole 18 bases in 23 attempts.

What does Baez believe is the most important ingredient he brings to Detroit?

''I think my energy,'' he said, flashing a wide smile on the Zoom call and wearing a Tigers cap. ''I think we're obviously going to have more fans that want to come to see me play, and obviously the Tigers. I have a huge family that follow me everywhere.''

The versatile right-handed hitter has become a dependable power source and run-producer. Baez, in baseball's last three full seasons (2018, 2019 and 2021), averaged over 31 homers and 94 RBIs.

''He's a perfect fit for us,'' Tigers manager A.J. Hinch said. ''Javy brings a lot to a team. He's been on a World Series team and seen it go from maybe an immature team, to a mature team, to winning the World Series. He's got an incredible impact on a team. I wanted him to know (during negotiations) how excited I was and how good that I felt that I was going to write his name in the lineup every day at the shortstop position, and he was going to help us win.''

''The defense, the flair, the power that he brings,'' Avila said. ''But his competitive character is remarkable. He has a short memory and all he cares about is winning today's game.''

Avila, who met with Baez and his wife and two sons in Miami and conversed in Spanish, said he knew Baez was right for his team.

''Javy was excited to come to Detroit and be part of this renaissance,'' said Avila, adding that Baez discussed the Cubs' turnaround.

''We went through some tough times and had some tough things that we had to do,'' said Avila. ''So, this is obviously the good part, where you get to build it back up. ... Obviously, we're not happy yet, we're not satisfied yet until we get to the World Series and win it.

''Now, we can plan on bobblehead nights for guys like Javy Baez and Rodriguez as opposed to getting calls from the business side: `Can we do this for this guy or is he going to be around?''' he said.

Signing Baez before midnight Wednesday was important, with the labor situation in Major League Baseball and a possible lockout looming.

''I can't say that we made an adjustment,'' said Avila, adding that he spoke more with Baez than any other free agent. ''It all came to fruition at the end. It was our preference to make a deal sooner than later, but I can't say we did it because we felt we had to do it. If it didn't come to this, we would've waited. Javy said if he didn't feel the deal was good for him, he would've waited.''

Said Baez: ''It was 50-50. We didn't know what was going to happen when the deadline comes. I was just making sure I wanted to be with one of the best teams.''

''Having Miggy here, he's one of the best hitters in baseball. So, with the other young talent they have coming up, we've got a challenge to make a World Series. And that's what we're here for,'' he said.