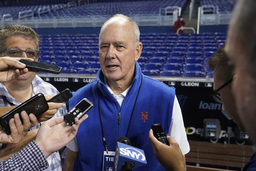 New York Mets president and general manager Sandy Alderson speaks to members of the media before the start of a baseball game between the Miami Marlins and the Mets, Tuesday, Sept. 7, 2021, in Miami. Acting general manager Zack Scott will not return to the New York Mets after being placed on administrative leave following an arrest on drunken driving charges in August, according to a person familiar with the firing. President Sandy Alderson assumed GM duties with Scott on paid leave and already oversaw the firing of manager Luis Rojas. (AP Photo/Wilfredo Lee, File)

''Today, after hearing and seeing all the evidence against our client, a judge in the White Plains City Court acquitted Zack Scott of all criminal charges against him,'' lawyer Bruce Bendish said in a statement. ''We are grateful for the judge's diligent attention and consideration of the evidence, and believe he arrived at the only conclusion possible.''

Scott was arrested in the early morning hours of Aug. 31 after police found him asleep at the wheel of his sport-utility vehicle at a traffic light and determined he was intoxicated, White Plains police said. They said Scott refused a breathalyzer test.

The arrest came hours after Scott attended a fundraiser for the team's Amazin' Mets Foundation at Cohen's house in Connecticut. Scott was placed on leave by the Mets and later fired.

Scott said said he was thankful for the verdict, adding, ''Nonetheless, I regret choices I made on August 31, resulting in circumstances that led to my arrest.''

He said the ''humbling experience'' of his arrest would make him ''a better husband, father, son, friend, and leader.''

An email seeking comment on Scott's acquittal was sent to a Mets spokesperson.

Scott's arrest was part of a turmoil-filled 2021 for the Mets, who led the National League East at the All-Star break but finished the season third in the division with a disappointing 77-85 record.

The Mets hired Scott in late 2020 as assistant general manager under general manager Jared Porter, a colleague from the Boston Red Sox. Scott was promoted to acting GM after Porter was fired over sexually explicit text messages he had sent to a female reporter in 2016 while working for the Chicago Cubs.