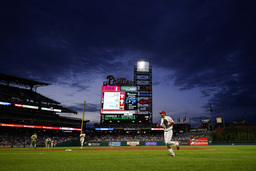 Philadelphia Phillies right fielder Nick Castellanos jogs to the dugout during a baseball game against the San Diego Padres, Wednesday, May 18, 2022, in Philadelphia. (AP Photo/Matt Slocum) 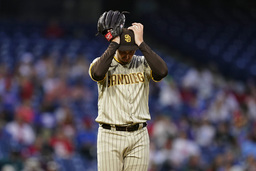 San Diego Padres pitcher Blake Snell adjusts his hat during the fourth inning of a baseball game against the Philadelphia Phillies, Wednesday, May 18, 2022, in Philadelphia. (AP Photo/Matt Slocum) 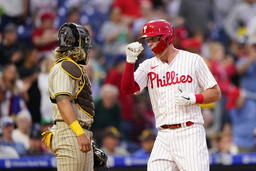 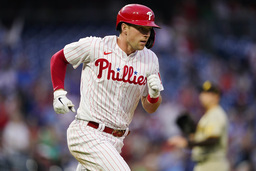 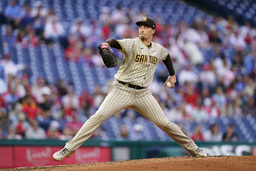 San Diego Padres' Blake Snell pitches during the second inning of a baseball game against the Philadelphia Phillies, Wednesday, May 18, 2022, in Philadelphia. (AP Photo/Matt Slocum) 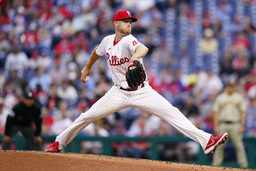 Philadelphia Phillies' Zack Wheeler pitches during the second inning of a baseball game against the San Diego Padres, Wednesday, May 18, 2022, in Philadelphia. (AP Photo/Matt Slocum) 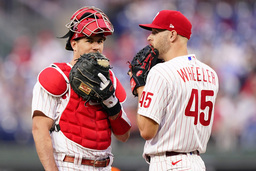 Philadelphia Phillies' J.T. Realmuto, left, and Zack Wheeler talk during the first inning of a baseball game against the San Diego Padres, Wednesday, May 18, 2022, in Philadelphia. (AP Photo/Matt Slocum)

PHILADELPHIA (AP) Zack Wheeler watched Eric Hosmer give a 96 mph fastball a ride to about the warning track at Citizens Bank Park and thought for sure the ball was gone.

Not with the way Wheeler has been throwing. Right fielder Nick Castellanos chased the ball down for an out in the seventh inning.

Hosmer smiled at Wheeler as he jogged back to the dugout. The Phillies' ace got away with one in perhaps his finest outing this season.

Wheeler (2-3), who lost his first three starts of the season, had yet another outing more in line with the ones that helped him finish second in NL Cy Young Award voting last season. He allowed four hits and walked none over 94 pitches.

''Still got a little bit to work on,'' Wheeler said.

He sure doesn't pitch like there's much more to improve.

Wheeler tossed six shutout innings against Colorado on April 28 for his first win this year and followed that with 7 2/3 scoreless innings against Texas on May 4. The lanky right-hander has a 1.04 ERA over his last four starts and has seemingly recovered from a recent bout with COVID-19 and right shoulder soreness that plagued him in spring training.

Manger Joe Girardi said Wheeler is about back to last season's form.

''He's pretty close. Had he not had the COVID IL, I think he probably would have been there,'' Girardi said. ''I think we were a little bit still cautious today.''

Jose Alvarado worked the eighth and Corey Knebel earned his eighth save.

The Phillies won without NL MVP Bryce Harper in the lineup. Harper could return Thursday against the Padres as he recovers from a platelet-rich plasma injection in his right elbow.

Slumping catcher J.T. Realmuto picked up the slack. He threw out a runner at third base from foul territory, snapped an 0-for-13 skid with an RBI single, and took a foul ball off his mask.

And that was all by the third inning.

Realmuto and Hoskins helped spoil Blake Snell's first start of the season in his return from a groin injury. The 2018 AL Cy Young Award winner with the Rays, Snell (0-1) was slated to start San Diego's fourth game this year. He was scratched minutes before first pitch and instead made three rehab starts. He couldn't follow on Mike Clevinger's five shutout innings a night earlier and add to San Diego's MLB-high 19 quality starts.

Snell lasted 3 2/3 innings and gave up three hits, three runs and struck out five in his first appearance since Sept. 12, 2021.

Hoskins' solo shot in the third, his seventh, made it 2-0. Odubel Herrera chased Snell with an RBI double in the fourth. After a slow start, Hoskins has five homers and 11 RBIs over his last nine games.

The offense backed Wheeler just enough for the Phillies to snap a two-game skid.

''I know we've got a good team and I just tried to go out there and do my thing and pitch the best I can,'' Wheeler said.

San Diego's Ha-Seong Kim hit an infield single in the first inning. Third baseman Alec Bohm made a one-hop throw into foul territory for an error. Realmuto hustled to back up the play, retrieved the ball and nailed Kim at third base.

Realmuto's RBI single up the middle in the first made it 1-0. Eric Hosmer clocked a foul ball straight back into Realmuto's mask in the second. Realmuto needed a moment but stayed in the game.

Phillies: Harper hasn't played right field since April 16 and will remain as DH whenever he returns. OF Mickey Moniak (broken wrist) will start a rehab assignment Thursday in extended spring training in Clearwater, Florida.