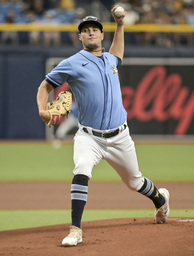 The Rays won the first game 6-2, and nearly doubled their run output for the second with an 11-5 win.

''It kind of all came together for us through the course of a long day,'' Rays manager Kevin Cash said. ''It's tough to win both games of a doubleheader, so really proud and impressed with the guys.''

Vladimir Guerrero Jr. hit a solo blast for his 19th home run and Bradley Zimmer added a two-run homer in the second game, but couldn't keep Toronto from losing a doubleheader at home for the first time in five doubleheaders.

Left-hander Shane McClanahan (9-3) shut down the Blue Jays in the opener, allowing one run and three hits over seven innings and lowering his AL-leading ERA to 1.74. That win snapped the Rays' season-long four-game losing streak.

''The pitchers gave us a chance to win the game and our offense came alive today,'' Mejia said through a translator.

Toronto right-hander Kevin Gausman left Game 1 after he was hit in the right ankle by a 100 mph line drive off the bat of Wander Franco in the second inning. While X-rays were negative, the Blue Jays said Gausman had a right ankle contusion and that his status for his next start is uncertain.

''We'll see how he feels tomorrow and go from there,'' Blue Jays manager Charlie Montoyo said.

All nine Rays starters had at least one hit in Game 1. Tampa Bay finished with 13 hits in Game 1 and had 14 in Game 2.

''I hope we can just keep this going,'' Paredes said through a translator.

The Rays pounded Triple-A callup Thomas Hatch (0-1) in the nightcap, racking up 10 runs and 12 hits in 4 2/3 innings against the Blue Jays right-hander, who was making his first big league appearance of 2022.

Mejia hit a two-run homer in the second and a solo shot in the fifth, his fourth and fifth home runs of the season. It was his second career multi-homer game.

Paredes singled and scored in the second, hit an RBI double and later scored in the third, then connected off Hatch in the fifth for a three-run homer, which was his 13th of the season and eighth in 10 games. Paredes also hit a solo homer off Casey Lawrence in Game 1.

''Two wins in one day, it's hard to hate that,'' Rasmussen said.

In Game 2, Montoyo and first base coach Mark Budzinski both left the dugout in the third inning. The Blue Jays' clubhouse was closed after the game and the team said in a statement that Budzinski was dealing with a personal matter.

Before Game 1, Hall of Famer Vladimir Guerrero Sr. threw out the ceremonial first pitch to Vlad Jr. The Blue Jays handed out a dual bobblehead doll featuring the former Expos star and his slugging son.

McClanahan reached double digits in strikeouts for the fourth time in Game 1. He also struck out 10 in his previous start, June 26 against Pittsburgh.

Blue Jays: RH Max Castillo was optioned to Triple-A Buffalo after Game 1 so Toronto could recall Hatch to start Game 2.