Sat May 14 8:19am ET
By MIKE BARNER
Contributing Writer 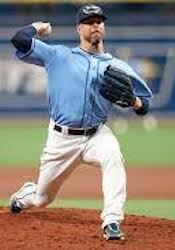 Kluber setup for bounce back

Week 6 looks like a busy one across baseball. There aren’t a lot of off days, and a few teams will even be playing doubleheaders. That leaves us with a bevy of two-start pitchers. Let’s discuss five of them, and what to do with them in fantasy baseball based on their respective matchups.

Kluber was smoked in his last start, allowing eight runs and 11 hits over three innings against the Angels. The Angels have scored the most runs in baseball, so at least Kluber didn’t have a bad outing against a weak-hitting team. Even with that gross stat line, he has a 4.55 ERA and a 3.76 FIP for the season.

Odorizzi is part of a stellar Astros starting rotation that is six pitchers deep. He’s held up his part, posting a 3.38 ERA that is supported by a 3.69 FIP. While his 15.6 percent strikeout rate leaves a lot to be desired, he’s only allowed a 31.3 percent hard-hit rate.

Normally, a matchup against the Red Sox would be scary for fantasy managers. However, their lineup isn’t nearly as lethal as it has been in years past, scoring the third-fewest runs in baseball. The Rangers have plenty of issues of their own, recording the fourth-worst OPS. These matchups could mean two more valuable stat lines for Odorizzi, although strikeouts might be lacking.

Kelly has already made seven starts, and he didn’t allow more than three runs in any of them. He’s logged at least six innings four times, and he has a sparkling 1.12 WHIP. One of the keys to his success has been him giving up just one home run over 42 innings. That’s a significant improvement since he allowed 21 home runs over 148 innings last season.

As good as Kelly has been, a matchup against the Dodgers is scary. He did face them once already, allowing three runs over six innings at home. The Cubs rank in the bottom-third of baseball in runs scored, so that second matchup is at least favorable. If you’re in a 10-team league, benching Kelly might be wise based on his matchup against the Dodgers. If you play in 12-team or deeper leagues, though, starting him might be worth the risk.

Given injuries to some of their starters, Archer has been locked into the Twins’ starting rotation. He’s made six starts, but the problem is, he didn’t pitch more than 4 1/3 innings in any of them. He’s also been taken deep six times over 22 1/3 innings, which is deadly when combined with his 1.48 WHIP.

As unappealing as Archer’s numbers are, he’s a viable streaming option this week in 12-team and deeper leagues. These two matchups are about as good as it gets. The Athletics have scored the seventh-fewest runs, and the Royals have been even worse by scoring the second-fewest runs. If Archer can last five innings, he could come away with a couple of wins, too.

Walker had an odd stat line in his last outing against the Nationals. He only allowed four base runners across seven shutout innings, but that came with just one strikeout. Through 18 innings this season, he has a total of just eight strikeouts.

Walker’s lack of strikeouts is a concern. Also concerning is a matchup against the Rockies at Coors Field. While their lineup isn’t nearly as fearsome as it has been in years past, the Rockies still have a .802 OPS at home. The Cardinals are no calk-walk either, given that they have scored the 11th-most runs in baseball. There might be other weeks in which you’ll want Walker in your starting lineup, but this isn’t one of them.