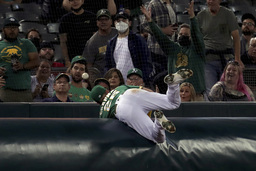 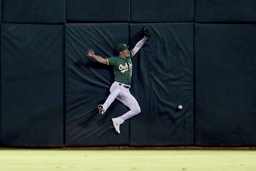 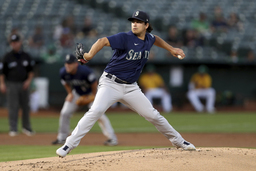 OAKLAND, Calif. (AP) Marco Gonzales pitched six uneven innings and won his eighth straight decision, and the Seattle Mariners beat Oakland 5-2 on Tuesday night, moving into a tie with the Athletics in a matchup of wild-card contenders.

J.P. Crawford hit a home run in the ninth inning and finished with three hits. Kyle Seager hit two doubles, and Dylan Moore added a two-run triple as Seattle won its second straight against the A's.

Both teams are three games behind the Toronto Blue Jays in the chase for the second AL wild card. Toronto beat Tampa Bay earlier Tuesday.

''Marco was on top of it,'' Mariners manager Scott Servais said. ''We came in here really thinking we needed to win this series (and) believed it. We get the first two, we're in a good spot. Unfortunately didn't pick up a whole lot of ground. We need help.''

Matt Olson hit his career-high 37th home run for the A's. It was the 21st off left-handed pitching, the most in a season by a left-handed hitter since Barry Bonds had 21 in 2002.

Starling Marte also connected for Oakland. The A's have lost two straight after winning five in a row.

''It goes without saying that it's time to go,'' Olson said. ''Three games out, 11 games to go, really not a whole lot to lose. We have to go out there and loosen up and play our game and see what happens at the end.''

Gonzales (9-5) allowed four hits and two runs, with three strikeouts and remained unbeaten since July 3. The Seattle lefty gave up both of the A's home runs, but pitched out of a two-on, two-out jam in the fourth and retired the final seven batters he faced.

''We're not afraid of anybody and we're not afraid of playing close games. That's a good combination, especially this time of year,'' said Gonzales, who was 1-5 before turning his season around. ''I had confidence that if I could stick to my routine and keep putting in the work that the results would come.''

Olson's 416-foot home run to right in the first inning gave the A's the lead. The Mariners tied it on an errant pickoff attempt to first by Oakland starter Paul Blackburn (1-3) in the second.

Jared Kelenic tripled leading off the fourth and was still at third after two strikeouts before Jake Fraley walked and Moore tripled off the wall in left-center. J.P. Crawford's single made it 4-1.

Marte homered leading off the bottom of the inning.

''It's kind of flipped back where we're getting at least really good bullpen efforts and not getting the offense,'' A's manager Bob Melvin said. ''We just have to time it up right. There's not a lot of time left, but there's still time to do it.''

The A's optioned RHP Miguel Romero to Triple-A Las Vegas to make room on the 28-man roster for RHP Michael Feliz, who was claimed off waivers from the Red Sox on Monday.

Athletics: Melvin announced that Chris Bassitt will come off the injured list and start Thursday's series finale, five weeks after the right-hander was hit in the head by a 100 mph line drive. Bassitt underwent surgery in the days after getting hit on Aug. 17, and made a much quicker-than-expected recovery. ''This is something that he's been trying to get back to doing from the very beginning,'' Melvin said. ''To me it's kind of miraculous, but considering it's Chris Bassitt, not so much.''