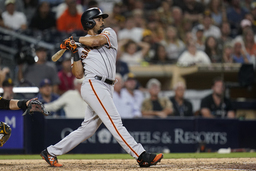 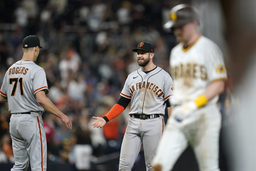 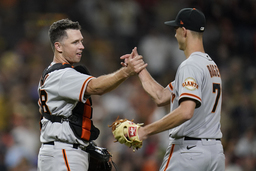 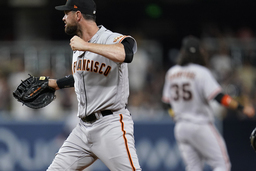 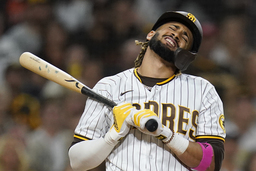 San Diego Padres' Fernando Tatis Jr. reacts as he strikes out while batting during the ninth inning of a baseball game against the San Francisco Giants, Tuesday, Sept. 21, 2021, in San Diego. (AP Photo/Gregory Bull) 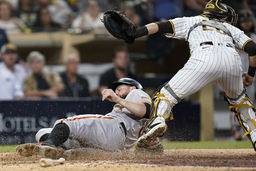 San Francisco Giants' Brandon Belt, below, scores off an RBI-single by LaMonte Wade Jr. as San Diego Padres catcher Austin Nola looks on, above, during the ninth inning of a baseball game Tuesday, Sept. 21, 2021, in San Diego. (AP Photo/Gregory Bull) 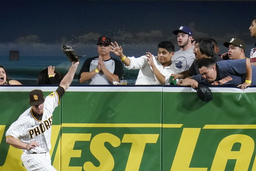 San Diego Padres right fielder Wil Myers pulls his glove back over the wall after making the catch for the out on San Francisco Giants' Steven Duggar during the eighth inning of a baseball game Tuesday, Sept. 21, 2021, in San Diego. (AP Photo/Gregory Bull) 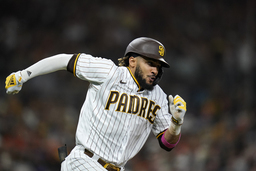 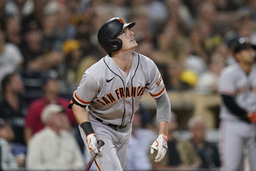 LaMonte Wade Jr. singled over leaping All-Star shortstop Fernando Tatis Jr. in the ninth inning to bring in the go-ahead run and the Giants beat the staggering San Diego Padres 6-5 Tuesday night to keep a one-game lead in the NL West.

It was the fifth time since the All-Star break that Wade delivered a tying or go-ahead hit in the ninth.

''Late Night LaMonte, that's what everybody's been calling him,'' said starter Kevin Gausman, who watched from the clubhouse after lasting just four innings. ''It seems like he always comes up in a big situation and has a good-quality at-bat and puts the ball in play and has been a huge part of what we've done this year. You can't speak enough about how well he's been able to play this year in so many different spots.''

Wade's hit was the third straight one-out single off Mark Melancon (4-3) and brought in Brandon Belt from second ahead of the throw from left-fielder Tommy Pham. Melancon, who leads baseball with 37 saves, started the ninth with the score tied at 5.

The Giants stayed ahead of the Dodgers in the division race after Los Angeles beat Colorado 5-4.

Wade chuckled at the nickname.

''I've been hearing the nicknames and everything like that,'' he said. ''I guess that's pretty cool, some of the guys in there are laughing about it and say it in the locker room. Anytime you can help out this team win is just a great feeling. You definitely want to keep that going and hopefully it can be `Early Game LaMonte' at some point. But if it's got to be 'Late Night,' then it's `Late Night.'''

The Padres blew a 4-1 lead and wasted a two-homer performance by Manny Machado three nights after his dugout dustup with Tatis. Machado came up with runners on first and second and one out in the ninth and grounded into a double play.

''No situation is too big for us as a unit and it's just a lot of fun when we put it together and go out there and play good defense and run off a good play at the plate,'' Wade said.

The Padres lost for the ninth time in 11 games, a skid that has dropped them from a one-game lead for the second wild-card spot to five games behind St. Louis, with Cincinnati a game ahead of them and Philadelphia a half-game ahead.

Padres right fielder Wil Myers made a great leaping catch to rob pinch-hitter Steven Duggar of a two-run homer to end the eighth and keep the game tied at 5.

Tatis added an RBI single for the Padres, whose chances at the second wild card were seriously damaged when they went 2-8 on a trip through Los Angeles, San Francisco and St. Louis.

San Francisco rallied from the 4-1 deficit to take a 5-4 lead in the sixth against Joe Musgrove. Brandon Crawford doubled in Kris Bryant with the tying run and then scored the go-ahead run on Mike Yastrzemski's sacrifice fly.

San Diego's Austin Nola tied it with a homer off Zack Littell leading off the sixth.

The Giants started their comeback in the fifth when pinch-hitter Wilmer Flores had an RBI single and Buster Posey a sacrifice fly.

Both of Machado's homers were off Gausman, an All-Star who lasted only four innings, and both reached the Western Metal Supply Co. brick warehouse in the left-field corner. Machado homered with two outs in the first and leading off the third. It was his 30th career multihomer game and third this season. He has 26 homers this year.

Gausman, who lost to the Padres on Thursday in San Francisco, allowed four runs and nine hits while striking out three and walking none.

It was in St. Louis in Saturday night that Machado shouted and cursed at Tatis during a face-to-face confrontation between the All-Stars. The dustup came after Tatis struck out looking and then argued the call by umpire Phil Cuzzi. Padres manager Jayce Tingler was ejected when he came out to argue on Tatis' behalf.

Machado and Tatis stood next to each other after batting practice Tuesday and said all is well between them. Machado called Tatis ''my little brother,'' adding that the dugout blowup was unfortunate and happened due to the pressure of trying to win.

Padres: Designated RHP Jake Arrieta for assignment and reinstated RHP Javy Guerra from the 60-day injured list. The 35-year-old Arrieta was 0-3 with a 10.95 ERA in four starts with San Diego after being signed to a minor league contract following his release by the Chicago Cubs. He left Sunday's start in St. Louis with a groin injury after getting just one out.