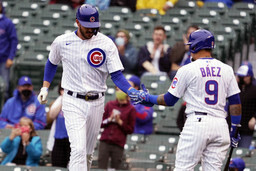 Chicago Cubs' Kris Bryant, left, is greeted by Javier Baez (9) after scoring against the Los Angeles Dodgers during the first inning of the first baseball game of a doubleheader Tuesday, May, 4, 2021, in Chicago. (AP Photo/David Banks)