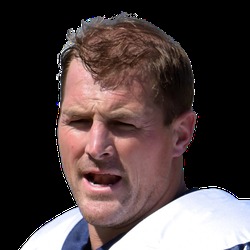 The Las Vegas Raiders agreed to terms on an undisclosed deal with tight end Jason Witten on Tuesday. Witten came out of retirement in 2019 to record 63 catches for 529 yards and four touchdowns over a full season with Dallas. His illustrious career with the Cowboys comes to an end after 16 seasons, and Witten will surely be in the Hall of Fame when all is said and done. But he definitely looked like a player near the end last year and failed to gain much separation at all in the middle of the field. The Raiders already have Darren Waller as one of their top pass-catchers and also Foster Moreau, so Witten will strictly provide veteran depth. He's an unattractive low-end TE2.

Dallas Cowboys impending free-agent TE Jason Witten reached agreement on a one-year deal with the Las Vegas Raiders, according to a source Tuesday, March 17. Witten can earn up to $4.75 million in 2020.

Fantasy Spin: Witten's role is unknown, as Darren Waller is coming off a 1,145-yard breakout 2019 campaign. Waller could move to wide receiver for the 2020 season to open up more snaps for Witten, but the veteran won't be an option as anything more than TE2 to begin the season.

Dallas Cowboys owner Jerry Jones made it clear that he wants to re-sign tight end Jason Witten. I feel strongly he wants to play and I think he can play, Jones said. I would hope that he would not ever be anything but a Cowboy. Its meaningful. Hes in the tops right there. I do think he can play. As I sit here right now I think he can make a real contribution to the Cowboys. Witten played 75 percent of the offensive snaps last year and had 63 catches for 529 yards and four touchdowns. But Witten is slow on the field and is getting in the way of Blake Jarwin, who is expected to have a bigger role in 2020. If Witten returns, he'll have to accept a lesser role. Even if he lands somewhere else, the aging veteran is nothing more than a low-upside, touchdown-dependent TE2.

Impending free-agent TE Jason Witten (Cowboys) made it clear to reporters Tuesday, Feb. 18, that he intends to play next season and hopes to do so with the Dallas Cowboys, although he is not opposed to finishing his career somewhere else. He is hoping to make a more concrete decision about his future following the NFL Scouting Combine next week.

Dallas Cowboys tight end Jason Witten, who will be a free agent next month, wants to play another season and hopes he can remain with the Cowboys. However, Witten understands that he might have to go elsewhere if he wants to play in a 17th NFL season. The veteran tight end has met with new head coach Mike McCarthy and has talked with owners Jerry Jones and executive vice president Stephen Jones. Witten hauled in 63 catches for 529 yards and four touchdowns in 2019 in his return from a one-year absence from the game. He's headed into his age-38 season, and while he can still give something to a team, he won't be anything more than a touchdown-dependent, low-end TE2 if he plays again in 2020 for the Cowboys or another squad.

Dallas Cowboys TE Jason Witten, a pending free agent, said Saturday he remains undecided on retirement and is realistic about possibly finishing his career with another team.

Fantasy Spin: The future Hall of Famer did finish 12th among fantasy tight ends (76.9 total points) last season at age 37, but his TE1 days are behind him, and it's hard to imagine him starting over with another team if the Cowboys don't bring him back.

Dallas Cowboys impending free-agent TE Jason Witten has not ruled out playing in 2020 and could join the New York Giants because of his connection with offensive coordinator Jason Garrett, according to sources.