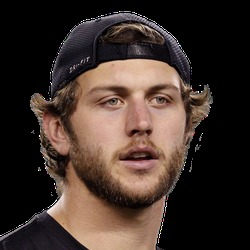 Jacksonville Jaguars TE Tyler Eifert suggested during an interview with the team's website Thursday, May 14, that the presence of new offensive coordinator Jay Gruden was 'a big factor' why he chose to sign with the team in free agency.

Fantasy Spin: The two spent their only year together during Eifert's rookie season with the Cincinnati Bengals in 2013, but it's clear the tight end did not forget his former offensive coordinator. It will be interesting to see if the oft-injured 29-year-old (who will turn 30 in early September) will be managed in the same way he was in 2018, as less playing time allowed him to make it through a full 16-game schedule for the first time in his career. Owners should consider him a low-end TE2 with decent upside if that can happen.

Fantasy Spin: Eifert was one of the best receiving tight ends in football, but he has been ravaged by injuries. He's someone you want to pair with another fragile tight end in fantasy, like Evan Engram, and you can mix and match upside injury risks.

The Jacksonville Jaguars signed tight end Tyler Eifert to an undisclosed two-year deal on Tuesday, according to a source. Eifert, a former first-round pick by the Bengals, will try to solve Jacksonville's woes at the tight end position. He should be the top pass-catching option at the position for quarterback Gardner Minshew, and he will be reunited with offensive coordinator Jay Gruden, who was his OC in Cincinnati. The current tight ends on the roster other than Eifert have a combined 64 career catches. It's bad news for Josh Oliver, a third-round pick last season, and he's coming off an injury plagued year that saw him play only four games. Eifert managed to avoid injuries and play a whole season for the first time in his career in 2019, catching 43 of 63 targets for 436 yards and three touchdowns. He made the Pro Bowl in 2015, but injuries have limited him his entire career. The former 21st overall pick will be a risky TE2 with upside for more if he can stay on the field.

Updating a previous report, unrestricted free-agent TE Tyler Eifert (Bengals) agreed to a two-year deal Tuesday, March 24, with the Jacksonville Jaguars. Financial terms were not disclosed. Eifert will be reunited with his first NFL offensive coordinator in Jay Gruden, who holds the same position in Jacksonville.

Fantasy Spin: Gruden's offense tried to utilize tight ends in Washington, but Jordan Reed couldn't stay healthy enough to make it happen to the fullest of the system's designs. Eifert's rookie season (39-445-2) came with Gruden coaching the Bengals' offense, so there isn't much of a track record. The offense should be a refresher in terminology and any new implementations since 2013, but it won't be a long learning curve. QB Gardner Minshew gets a proven checkdown, and the oft-injured Eifert even managed to make it through 16 games in 2019. He is a quality TE2 with a glimmer of hope to be more than a matchup play.

The Jacksonville Jaguars are working diligently to sign former Cincinnati Bengals tight end Tyler Eifert to a deal, according to a source. The Jaguars are looking to upgrade on a position that plagued them in 2020, and they currently have Josh Oliver at the top of the tight end depth chart. If healthy, Eifert would provide quarterback Gardner Minshew with a pass-catching option at the position and a solid red-zone target. Staying healthy has been tough for the 29-year-old, though, as he managed to stay healthy for 16 games in 2019 for the first time in his career, although he started just four games. Eifert can be a TE1 if he's on the field, but he's started just eight games since 2016 because of various ailments. He'll be a high-risk, potentially high-reward TE2 for fantasy owners if he lands in Jacksonville.

Free-agent TE Tyler Eifert (Bengals) is working on a contract with the Jacksonville Jaguars, according to a source Tuesday, March 24.

Fantasy Spin: Eifert would immediately rise to the top of the Jaguars' tight end depth chart. Plagued by injuries throughout his career, the former first-round draft pick would be worth yet another shot as a late-round tight end option in standard fantasy formats. He remains an excellent red-zone target.

Cincinnati Bengals impending free-agent TE Tyler Eifert said he would like to continue his career in Cincinnati, but Ben Baby of ESPN.com believes Eifert will receiver a bigger offer on the open market.

Cincinnati Bengals tight end Tyler Eifert pulled in both of his targets for 34 yards on Sunday against the Browns. Eifert, who logged the first full-season of his career in 2019, was a disappointment from a fantasy standpoint for those who were looking for a repeat of his 2015 campaign. However, things didn't work out as he failed to record more than 74 receiving yards in any of his 16 games, while also racking up at least five receptions just twice. The 29-year-old will be a free agent this offseason, but he should draw interest from multiple teams heading into the 2020 season.

Cleveland Browns TE Tyler Eifert (non-injury) fully participated in practice Friday, Dec. 27, and is not on the injury report for Week 17.

Fantasy Spin: Eifert has posted at least 40 yards in each of the last three games but is still not a big part of the passing game. He can be avoided in fantasy leagues if better tight ends are available.

Fantasy Spin: Eifert has caught 11 passes over the last three games and is coming off one of his better games of the season. He has a chance to be a low-end No. 1 tight end in deeper leagues.

Fantasy Spin: Eifert has been playing better over the last few weeks and has been targeted 17 times over the last three games. He has a chance to be a low-end No. 1 tight end in deeper leagues but is not a must-start option.

Cincinnati Bengals tight end Tyler Eifert had four catches (eight targets) for 57 yards during the loss to Miami on Sunday. Eifert also had a critical touchdown, catching a 25-yard desperation toss from Andy Dalton for six as time expired in the fourth quarter to send the game into overtime. Though Eifert has had a season to forget, it was a welcome performance for those who still utilize his services in fantasy lineups on a week-to-week basis. With one more game to go, the veteran will look to close out the season on a positive note against the Browns at home.

Cincinnati Bengals TE Tyler Eifert ended up with four receptions for 57 yards and a touchdown in Week 16 against the Miami Dolphins.

Fantasy Spin: Eifert had his most complete game of the season, showing what he is capable of doing when he is healthy. He can be a dynamic red-zone threat when he is on the field, but he cannot seem to stay healthy for long chunks of time. The Bengals wrap up the season against the Cleveland Browns in Week 17.

Cincinnati Bengals TE Tyler Eifert (non-injury) fully participated in practice Friday, Dec. 20, and is not on the injury report for Week 16.

Fantasy Spin: Eifert has caught at least five passes in only two games this season and only one game of at least 50 yards. He probably should be avoided in fantasy leagues this week.

Fantasy Spin: Eifert has posted decent numbers over the last few games but has posted at least five catches in only two games in 2019. Fantasy players should be able to find better options and can keep Eifert on the bench.