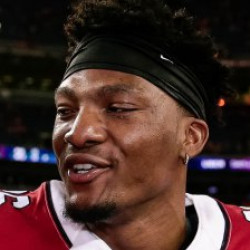 The Kansas City Chiefs agreed to an undisclosed deal with tight end Ricky Seals-Jones on Friday, according to a source. Seals-Jones played in 14 games (three starts) and caught just 14 passes for 229 yards, but he did score a career-high four touchdowns in his lone season with the Browns last year. It was disappointing that he wasn't able to do more, especially with David Njoku missing a big chunk of the year with an injury. In Kansas City, he'll be a little-used backup tight end behind stud Travis Kelce. If Kelce were to miss any time with an injury, however, Seals-Jones could have some TE2 appeal for fantasy owners.

The Cleveland Browns didn't give restricted free-agent tight end Ricky Seals-Jones a tender offer, putting him on the open market as an unrestricted free agent. Seals-Jones is now free to sign with any team. It makes sense for the Browns after they signed Austin Hooper on the first day of free agency earlier this week. The 25-year-old had 14 catches for 229 yards and four touchdowns in 14 games in his only season in Cleveland last year. He's still young and could find his way into the TE2 mix in fantasy if he lands in the right situation in free agency.

Cleveland Browns wide receiver Odell Beckham Jr. (illness) and tight end Ricky Seals-Jones (illness) are both active for Week 17 against the Bengals. Despite also dealing with a sports hernia, OBJ will tough it out and play in the season finale. It's been a disappointing year for the first-year Brown, but Beckham still has a shot at another 1,000-yard season with a good game on Sunday. He fell flat against Cincinnati's weak secondary in their first meeting, but look for the Browns to pepper both he and Jarvis Landry with targets this weekend. Beckham has WR2 upside to close out the season. Seals-Jones will be splitting snaps with both Demetrius Harris and David Njoku, who was been a healthy scratch the last two weeks. You'd be best off ignoring the tight end position in Cleveland.

Cleveland Browns tight end Ricky Seals-Jones (illness) was limited in practice on Friday and is questionable for Week 17 against the Bengals. Seals-Jones had two touchdowns on three catches two weeks ago against the horrible Cardinals Defense versus tight ends, but he has only 14 catches for 229 yards and four touchdowns in nine games this season. Even if he plays, RSJ will be a low-upside TE2 against Cincinnati while sharing time with Demetrius Harris. If Seals-Jones can't play, David Njoku should play after being a healthy scratch the last few weeks. Ignore the tight end position in Cleveland to close out the year.

Cleveland Browns tight end Ricky Seals-Jones had a big game against his former team in Week 15. Seals-Jones caught three of his four targets for 29 yards and two touchdowns in a 38-24 loss to the Arizona Cardinals, furthering Arizona's season-long struggles against the tight end. David Njoku was a surprise pregame scratch, which helped lead to a larger role for Seals-Jones. Regardless of what happens with Njoku in Week 16, none of the Cleveland tight ends will be recommended options against a tough Baltimore Ravens Defense.