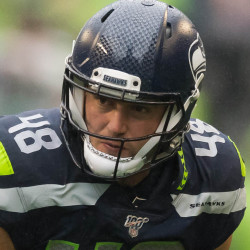 The Seattle Seahawks gave restricted free-agent tight end Jacob Hollister a second-round tender on Monday, according to a source. The Seahawks have already signed Greg Olsen and also have Will Dissly coming back from injury in 2020, but Seattle values Hollister as depth at the position. He was the team's third leading receiver last season, catching 41 passes for 349 yards and three touchdowns. Unless an injury ahead of him opens up playing time in Seattle, though, he's unlikely to have much fantasy appeal at all in redraft leagues.

Seattle Seahawks head coach Pete Carroll thinks highly of tight end Jacob Hollister and the team wants to bring him back as a restricted free agent. Will Dissly is coming off a torn Achilles last year and has two major lower-body injuries in the last two seasons, but the Seahawks also recently signed veteran Greg Olsen at the position. There's no guarantee that either of Olsen or Dissly will stay healthy for a full season, though, so perhaps Seattle wants to keep Hollister around for depth. The 26-year-old had a career-high 41 catches for 349 yards and three touchdowns in 11 games in 2019. He might have some low-end TE1 fantasy appeal if he were to land with another team as their starter.

Seattle Seahawks tight end Jacob Hollister didn't have a bad game for the first 56 minutes of Sunday's Divisional Round game against the Packers, but one big slip-up at the end sealed the deal for Seattle. Hollister, who was far more known for his blocking than his offense prior to this season, was charged with at least chipping the defensive end on the right edge on third down with the game on the line. Instead, Hollister whiffed, and the Packers got one last crucial sack that ended Seattle's final drive of the game. Hollister caught five passes for 49 yards and came through when the team needed him for the most part, but that missed block was a backbreaker.

Seattle Seahawks QB Russell Wilson completed 21-of-31 passes for 277 yards and a touchdown as the team fell behind by 18 points twice but made a late charge before falling short 28-23 in Sunday's NFC Divisional Round playoff game. Wilson led the team in rushing with 64 yards, while RB Marshawn Lynch rushed for 26 yards and two scores on 12 attempts. WR Tyler Lockett was highly efficient, turning his 10 targets into nine catches for 136 yards and a touchdown. WR DK Metcalf was held somewhat in check after setting a playoff record for most receiving yards by a rookie one week ago, finishing with four receptions for 59 yards. TE Jacob Hollister hauled in five catches for 47 yards. RB Travis Homer chipped in 27 more yards through the air to go along with his 13 rushing yards. CB Tre Flowers, LB K.J. Wright and DE Jadeveon Clowney paced Seattle with seven tackles apiece. LB Shaquem Griffin tallied one of Seattle's two sacks, while Wright and Clowney combined on the other.

Seattle Seahawks tight end Jacob Hollister has been a surprise contributor this season, but he's probably going to spend more time as a blocker than receiver this weekend. Green Bay has been above average against opposing tight ends all season, but they've really stepped it up recently and have been the harshest defense in the entire league versus opposing TEs over the last month. Hollister has struggled to break out against defenses after his surprise coming out party, and with the Packers' struggles against the run game, Hollister will probably play a much bigger role making holes than running into space. Unfortunately, blocking doesn't give many fantasy points.

Seattle Seahawks tight end Jacob Hollister had one of the worst games of his career on Sunday. It wasn't just that Hollister only caught two passes for a total of 16 yards. It was that when he wasn't catching passes, he was committing penalties. Hollister got called for a pair of false starts and an offensive pass interference. Fortunately, Seattle was able to overcome Hollister's mistakes on all three occasions, eventually getting first downs and keeping all three drives alive. Hopefully, Hollister can learn from this terrible day and do better next week. With Seattle forced to travel to Lambeau, they'll need everyone at the top of their game if they hope to pull out a win.

Seattle Seahawks QB Russell Wilson completed 18-of-30 passes for 325 yards, one touchdown and no interceptions in the NFC Wild Card Game Sunday, Jan. 5 against the Philadelphia Eagles. He also led the team with 45 rushing yards. RB Marshawn Lynch rushed six times for just seven yards, but he had a touchdown and 25 receiving yards. WR DK Metcalf had seven grabs for a game-best 160 yards and a touchdown, while WR Tyler Lockett had four grabs for 62 yards. WR David Moore also chipped in with 57 yards on two grabs, while TE Jacob Hollister had two grabs for 16 yards on four targets. S Bradley McDougald had 11 total stops with a sack, two tackles for loss and a quarterback hit, while LB/DE Jadeveon Clowney also had five total stops, a sack, two tackles for loss and a quarterback hit.

Seattle Seahawks tight end Jacob Hollister will face a stiffer than expected test on Sunday against an Eagles Defense that's fifth in the NFL in fantasy points allowed to tight ends on the season. When a tight end has seen seven or more targets against the Eagles, only one of them has failed to score double-digit points. Hollister sees just under six targets a game over the last eight weeks and leads the Seahawks with 29.4% of their red-zone targets of that span. Hollister will be involved in the passing game, but unless the Seahawks are down and need to give him more targets than average, he'll need a touchdown to provide fantasy value.

Seattle Seahawks tight end Jacob Hollister was traded to Seattle by New England for a seventh-round draft pick this past April. Eight months later, he missed being the city's hero by two inches. Hollister was dialed up for a short slant across the middle in the waning seconds of the fourth quarter of Sunday night's game, and he came tantalizingly close to crossing the plane of the goal line. Unfortunately, the vicious helmet-to-helmet shot he took at the one-yard line slowed him just enough so that he hit the turf a split-second before the ball reached the line. Hollister has shown that he's capable of being a solid starting tight end, and the coaches have shown that Philadelphia better account for him next week.

Seattle Seahawks QB Russell Wilson completed 25 of 40 passes for 233 yards, two touchdowns and no interceptions during the team's loss to the San Francisco 49ers on Sunday, Dec. 29. RB Travis Homer carried the ball 10 times for 62 yards and caught five passes for 30 yards. RB Marshawn Lynch had a dozen carries for 34 yards and a touchdown. WR DK Metcalf had six receptions for 81 yards and a touchdown. WR Tyler Lockett posted six catches for 51 yards and a score. TE Jacob Hollister had four receptions for 25 yards.

Seattle Seahawks tight end Jacob Hollister was still having his coming-out party last time the team faced off against the 49ers, and he ended up hauling in eight catches for 62 yards and a touchdown against the rivals. Now, the league has tape on him and his utility has been cut. He'll have to put on some fancy moves to get free once again, but if he can, expect him to see plenty of work. Hollister could prove to be the key to Seattle's success, but he's got a tough road ahead of him. San Francisco is one of the stingiest defenses in the league versus opposing tight ends, and they'll be ready for him this time.

Seattle Seahawks tight end Jacob Hollister was expected to have a good day against a Cardinals Defense that has been plagued by opposing tight ends all season, and he led the way for Seattle's pass-catchers on the day. Unfortunately, it still wasn't too brilliant a performance as Hollister failed to score. That said, Hollister was able to tally 64 yards on the day, the largest single-game total of his career. Hollister has been a bright spot for the Seahawks this season, and hopefully he can put up another strong performance against SF next week.

Seattle Seahawks TE Jacob Hollister ended up with five grabs for a team-high 64 yards on six targets in Week 16 against the Arizona Cardinals.

Fantasy Spin: The Cardinals struggled against the tight end all season, and Hollister added to those woes with yards per catch average. He has emerged as a decent TE2 for fantasy owners this season. The Seahawks finish with the 49ers in Week 17 on Sunday night.

Seattle Seahawks tight end Jacob Hollister has been struggling a bit recently, but this week is just what the doctor ordered. Hollister gets to face an Arizona Cardinals team that isn't just the worst in the league versus opposing tight ends, but they give up more than 25% more fantasy points to opposing tight ends than any other team in the league. In Seattle's first matchup with the Cardinals, tight end Will Dissly (Achilles) was the team's leading receiver, and Hollister should fit that role nicely this week. This could be Hollister's big chance to remind everyone of how good he can be.

Seattle Seahawks tight end Jacob Hollister caught all three passes slung his way on Sunday, but they only added up to 23 yards and no scores. Hollister burst onto the scene earlier this year when Will Dissly hit the IR with a torn Achilles, but he's cooled down as the weeks have gone on. He's faced a few tough matchups, but he's also having to deal with the thing all players struggle with at some point, which is that teams are starting to adjust to him. As teams get tape on opposing players, they learn their moves, they learn their sets, and they start to account for them. The test will now be whether Hollister can make the appropriate adjustments to his game to get more chances. That remains to be seen.

Seattle Seahawks tight end Jacob Hollister has been a revelation this season, but he's come back to Earth recently. He'll be facing another uphill battle this weekend when Seattle visits Carolina, one of the stingiest defenses in the game versus opposing tight ends. Hollister has been held without a TD for three straight weeks, and he hasn't cracked 50 yards receiving during the stretch either. Meanwhile, the Panthers have allowed the third-fewest fantasy points to opposing tight ends this season, and they haven't allowed a tight end touchdown in nearly a month. Hollister is still a talented receiver, but other teams have caught on to some of his moves and he'll be in for another challenge in Week 15.

Fantasy Spin: Hollister has developed into a relatively safe floor play, but he has gone three games without a touchdown and hasn't fully rewarded fantasy managers. He's a low-end TE1 due to the shallow nature of the position.