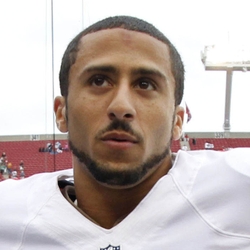 Friends and associates of free-agent QB Colin Kaepernick (49ers) have been contacted by several NFL teams, as clubs continue to do research on him, according to multiple sources familiar with those conversations.

There is interest from teams around the NFL in free-agent quarterback Colin Kaepernick. They seem to be doing more homework on him than in recent years, although teams haven't yet engaged in direct negotiations with Kaepernick's representation. The new Lions owner said she'd be completely fine with Detroit bringing in Kap if they felt it was the right move, and Chargers head coach Anthony Lynn said Kaepernick's style of play fits their offense, but they are comfortable with their QB room of Tyrod Taylor, rookie Justin Herbert and Easton Stick. The 32-year-old hasn't played in the NFL since 2016. He was a dangerous dual-threat signal-caller, but it remains to be seen how much he actually has left in the tank physically. If a team brings Kaepernick aboard, it would be strictly as QB depth.

Free-agent QB Colin Kaepernick (49ers) has not been contacted by any team over the last several weeks.

Las Vegas Raiders owner Mark Davis said Wednesday, June 17, he embraces the idea of the team signing free-agent QB Colin Kaepernick (49ers). 'Since 2017, I've told the coaches and general managers that if they want to hire Colin Kaepernick, they have my blessing,' Davis told ESPN.

Updating a previous report, free-agent QB Colin Kaepernick (49ers) is not scheduled to work out for the Los Angeles Chargers at this point, according to head coach Anthony Lynn. Lynn said the team has not been in contact with Kaepernick.

Los Angeles Chargers head coach Anthony Lynn told reporters he is happy with the team's three quarterbacks when asked about possibly signing free-agent QB Colin Kaepernick. 'Definitely fits the style of quarterback for the system we're going to be running,' Lynn said. Kaepernick and Lynn haven't spoken, but the quarterback appears to be on the team's emergency list, in the opinion of NFL Network's Ian Rapoport.

Philadelphia Eagles head coach Doug Pederson appeared Wednesday, June 17, on the 94WIP Morning Show with Angelo Cataldi and was asked about the possibility of signing free-agent QB Colin Kaepernick (49ers). 'I think it's something that if a team or even us were in a situation, we would look at all possibilities and scenarios,' Pederson said. 'The one thing you have to keep in mind is he hasn't played in a couple years. That still doesn't mean he couldn't come in and be a backup and learn your system and do those things for you. It's not out of the realm or possibility that could happen.'

Free-agent QB Colin Kaepernick (49ers) is unlikely to sign with the New England Patriots, in the opinion of beat writer Mike Reiss. Reiss believes if you see Kaepernick in a New England uniform, it's because somebody above head coach Bill Belichick on the Patriots totem pole made the move.

Free-agent QB Colin Kaepernick (49ers) has drawn interest from an undisclosed team. Seattle Seahawks head coach Pete Carroll said a team contacted him about Kaepernick Thursday, June 11. The Seahawks were interested in Kaepernick after he opted out of his contract with the 49ers in 2017.

An interested team called the Seattle Seahawks to ask about their experience with free-agent quarterback Colin Kaepernick when they worked him out back in 2017, according to head coach Pete Carroll. Carroll won't close the door on signing Kap now, but the Seahawks like their backup situation with Geno Smith returning. The head coach is under the impression that at least one team is interested in signing him this offseason. Carroll said that he regrets that the Seahawks didn't sign Kaepernick in 2017, but Seattle felt that he wasn't the right because they thought he was a starter and were certain that he'd be starting elsewhere that season.

Seattle Seahawks head coach Pete Carroll indicated that free-agent QB Colin Kaepernick (49ers) likely will not be an option for the Seahawks.

The National Football League isn't likely to put on a spectacle like they did last year in order to try and get free-agent quarterback Colin Kaepernick signed, according to a source, but there are increased hopes by some around the NFL that circumstances are more favorable for a team to sign him. Kaepernick famously created tons of controversy around the league and elsewhere by kneeling during the national anthem in 2016 in his final year with the 49ers, and he hasn't played in the NFL since. He led the Niners to a Super Bowl appearance and was a dynamic dual-threat QB in his prime, although the 32-year-old never threw for over 4,000 yards in a season and had a career-high 21 TD passes in 2013. If a team were to give Kap another shot, it would almost surely be as a backup signal-caller after so much time away.

Former Cleveland Browns head coach Hue Jackson said that he wanted the team to sign free-agent QB Colin Kaepernick (49ers) in 2017, during a radio interview with WKNR-AM's Tony Rizzo and Aaron Goldhammer. However, Jackson did not have the ability to make personnel decisions and the Browns selected DeShone Kizer in the second round of the 2017 NFL Draft instead.