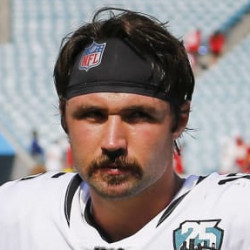 Minshew was a surprise his rookie year, finding his way into the starting lineup and having some big success in that role. He had some huge games and captivated the nation a little with his style and play on the field. He had 21 touchdowns to six interceptions in 14 games. He completed 61 percent of his passes and had nearly 3,300-passing yards. He also ran for almost 350 yards. Minshew was 20th overall in fantasy quarterback despite not starting all year. Minshew should get first shot to start for the Jaguars this coming year. Minshew is a playmaker. He moves around the pocket well and makes most his big plays outside the pocket. He also is pretty accurate for being a young player. He does miss some throws he should make and his accuracy will need to improve over time, especially on deep throws.

FANTASY OUTLOOK: Minshew was a legit fantasy option last year. He might be a little erratic with the way he plays, so don't count on him as an every-week starter. But he is definitely worth using as a platoon player. He has potential for the big game any given week. Look for around 3,500 yards, 30 total touchdowns and 400-rushing yards.

Jacksonville Jaguars quarterback Gardner Minshew II has impressed new offensive coordinator Jay Gruden with his work during the virtual offseason program. Gruden likes how Minshew has taken charge and seems to have a good grasp of the offense. "He has shown a skill set where he can sit in a pocket, step up, make things happen outside the pocket. He's accurate, he's tough and obviously he's a great leader, so he's got the intangibles you want in a quarterback," Gruden said. The sixth-round pick went 6-6 as a starter in his rookie season and had the highest passer rating and fewest interceptions among rookie QBs in 2019. The 24-year-old took the league by storm last year out of nowhere and has the ability to make things happen outside the pocket and with his legs, as he rushed for 344 yards in 2019. All things considered, though, Minshew is a low-end QB2 that will likely see more inconsistency in his second season.

Jacksonville Jaguars offensive coordinator Jay Gruden said that it's his job "to make it mesh" with quarterback Gardner Minshew II. "I love Gardner's competitive spirit. Now it's just a matter of him getting some general knowledge of our offense and me figuring out what he likes, what he doesn't like, what makes him tick and go from there," Gruden said. In Gruden's last season as an offensive coordinator with Cincinnati in 2013, Andy Dalton had a career-high 33 touchdowns and career-high 4,293 yards. Minshew is set to be the team's starter heading into 2020, even if they sign a veteran QB before the season. The sixth-round pick a year ago showed toughness and mobility outside the pocket, but the ceiling isn't high and he remains in a run-first offense. Draft him as a midrange QB2, at best.

The Jacksonville Jaguars have signed a veteran quarterback, adding Mike Glennon to the team's roster. The 30-year-old passer hasn't started a game since 2017, when he threw for 833 yards, four touchdowns, and five interceptions for the Bears. Glennon isn't a threat to take playing time away from Gardner Minshew II even if Minshew struggles, so the fantasy relevance of this signing has much less to do with Glennon -- who wouldn't be worth a roster spot in one-QB leagues even if he was pressed into the starting lineup -- and more to do with some modicum of trust the team has in Minshew, who gets a slight boost to his value in redraft leagues since he won't have someone like Cam Newton behind him. Minshew is a mid-to-low end fantasy QB2.

Jacksonville Jaguars head coach Doug Marrone reiterated that second-year quarterback Gardner Minshew II is his starting quarterback on Friday, though he did say that there are "some veterans out there that [Jacksonville] might look at to bring in" as potential backups for Minshew. Rumors have circulated that Andy Dalton could be that veteran passer, but it does seem like the Jaguars intend to go into 2020 with Minshew as their guy at quarterback. After an uneven rookie campaign that saw Minshew start 12 games and throw for 3271 yards, 21 touchdowns, and six interceptions -- but that also saw him briefly lose his starting role to Nick Foles -- Minshew should be considered a mid-to-low end fantasy QB2 at this time.

The Jacksonville Jaguars and guard Andrew Norwell have agreed to a contract restructure, lowering Norwell's cap hit and overall salary in exchange for the team fully guaranteeing his $9 million base salary. By taking less money, Norwell now doesn't have to worry about being a cap casualty this offseason, and with him set to be on the roster, Jacksonville has one less worry on the offensive side of the ball. PFF graded Norwell as the best run and pass blocker on the Jaguars roster last season, and his continued presence on the line should help quarterback Gardner Minshew II find some stability as he looks to fight for his future as an NFL starting quarterback.

The Jacksonville Jaguars added a quarterback to their roster on Saturday, taking Oregon States Jake Luton in the sixth round. Luton might not have been the best quarterback left on the board, but his ability to throw deep makes sense for a Jaguars team thats been revamping their wide receiver corps lately. Hes set to compete for the backup job behind starter Gardner Minshew II, but lets not forget that Minshew was a sixth-round pick last year and doesnt have a lock on the starting job in Jacksonville long term. Luton is an interesting developmental project with the upside to eventually start if Minshew falters in his second season.

A friend of Jacksonville Jaguars head coach Dave Caldwell said that the Jaguars "really want to give Gardner Minshew II a real shot," so it's unlikely that they go with a quarterback with the No. 9 pick in the draft. A defensive player like Isaiah Simmons would make a lot of sense for Jacksonville with their first-round pick. It was clear that the Jags wanted to give Minshew the starting gig outright when they traded Nick Foles to the Bears this offseason. The sixth-round rookie was forced into action right away after Foles broke his collarbone in Week 1, and Minshew Mania was off and running shortly after that. The 23-year-old (24 in May) threw for 3,271 yards, 21 touchdowns and six interceptions in 14 games (12 starts). There isn't huge fantasy upside, but Minshew can be an acceptable QB2 in Jacksonville's run-first offense.

Jacksonville Jaguars head coach Doug Marrone and general manager David Caldwell said that the team will let quarterbacks Gardner Minshew and Nick Foles compete for the starting job in 2020. Joshua Dobbs will also be a part of the competition, which will begin as soon as organized team activities kick off this spring. Marrone suggested that the Jaguars won't select their starter until the preseason. Caldwell may have a soft spot for Minshew, but the Jags also signed Foles to a four-year, $88 million deal ($45 million in guarantees) in March of last year. Foles broke his collarbone in Week 1 and was benched upon his return. Minshew, a rookie in 2019, showed flashes but was mostly a game manager in this run-first offense. Whoever is under center to start next season will be a middling QB2 option.