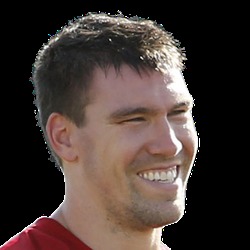 Brate was pretty mediocre most weeks in a backup role for the Bucs. He had one game with 10 receptions for 73 yards but had fewer than 50 yards every other game last season. Brate finished with 36 receptions for 311 yards. He was 24th in fantasy tight end scoring. Brate has posted similar numbers the last two seasons, averaging 33 receptions for 300 yards. He heads to third on the depth chart his year for the Bucs, though, with Rob Gronkowski and O.J. Howard ahead of him. He might get a little less playing time. Brate is a tall tight end with good speed for the position. He isn't a great blocker and lacks some strength, but is an asset in the passing game because of his size and speed. Brate is a playmaker.

FANTASY OUTLOOK: Brate might need a change of scenery of injury to kickstart his fantasy value. If that doesn't happen, he probably isn't worth a roster spot for fantasy teams. He should get around 30 receptions for 300 yards and four or so touchdowns.

Considering that fellow tight end O.J. Howard was a complete non-factor last year, Cameron Brate's 2019 season was very disappointing. It becomes even more disappointing considering the fact that Jameis Winston threw for a league-high 5,109 yards and 33 touchdowns. Brate managed only 36 receptions for 311 yards (career-low 8.6 yards per catch) and four touchdowns, his lowest TD total since 2015. There was optimism for the 28-year-old to bounce back when Tom Brady chose to sign with the Bucs, but that optimism quickly faded when Tampa also brought Rob Gronkowski out of retirement. It looks like Bruce Arians plans to feature more two-tight end sets with Gronk and Howard this year, leaving Brate as the odd man out. He can still be a red-zone weapon, but his precipitous fall down the depth chart in Tampa makes him one to avoid in redraft leagues to begin the season.

Tampa Bay Buccaneers TEs Rob Gronkowski, O.J. Howard and Cameron Brate will all spend plenty of time on the field in 2020, according to head coach Bruce Arians. 'That's our base offense,' Arians said when asked about the Buccaneers using 12 personnel with one running back and two tight ends, according to Greg Auman of The Athletic.

Fantasy Spin: Howard seems to be the real winner here, as it had been assumed Gronkowski would supplant him as the starter at the position. Howard struggled in 2019, his third year in the NFL, finishing the season with just 34 receptions, 459 yards and one touchdown. He should be serviceable as a TE2 behind Gronkowski, while Brate won't have much value unless one of the other two misses time.

Fantasy Spin: During the current atmosphere of COVID-19 having shut down facilities, it's good to see Brady and Co. get in some practice work. Barring any wild turn of events, TB12 is a fringe No. 1 fantasy quarterback in upcoming drafts.

The Tampa Bay Buccaneers restructured tight end Cameron Brate's contract in order to keep him around. Brate was due to make $6 million in 2020, with $4 million of that being guaranteed on Sunday. He has scored 27 touchdowns with the team in the last five years, including four touchdowns in 2019 on 36 receptions for 311 yards in 16 games (six starts). He should be a key red-zone weapon for quarterback Tom Brady in 2020, but his fantasy ceiling will be limited as long as O.J. Howard is around. As long as he's sharing tight end duties, he's unlikely to match his high-water mark of 57 catches for 660 yards and eight touchdowns in 2016. Brate will be a low-end, touchdown-dependent TE2.

The Tampa Bay Buccaneers have restructured the contract of TE Cameron Brate. He is slated to receive $6 million in 2020 and $4 million was expected to become guaranteed Sunday, March 22.