TKO to the chin: Astros' Bregman out after grounder to face 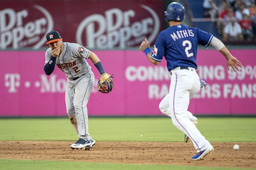 Houston Astros shortstop Alex Bregman (2) reacts after being hit in the face by a ground ball by Texas Rangers' Shin-Soo Choo as Jeff Mathis (2) runs towards second during the third inning of a baseball game Thursday, July 11, 2019, in Arlington, Texas. Bregman left the game because of the injury. (AP Photo/Jeffrey McWhorter)

ARLINGTON, Texas (AP) All-Star infielder Alex Bregman left Houston's game at Texas on Thursday night after a groundball bounced up and hit him on the chin.

Manager A.J. Hinch said during an in-game interview on the ESPN broadcast that it looked like Bregman's chin was split open. Hinch said Bregman wanted to stay in the game, but the team got him out to get checked by a doctor.

Bregman was playing shortstop, and shifted toward the middle of the infield in the third inning when he went to field a grounder hit by Shin-Soo Choo. The ball took a late high hop and caught Bregman squarely on the lower half of his face, and there appeared to be blood when he was tended to by a trainer.

Bregman is Houston's primary third baseman, but has been playing shortstop with Carlos Correa on the injured list.