LEADING OFF: Baseball gets back into full swing 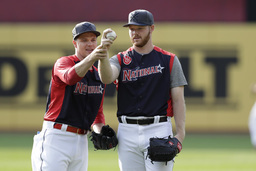 Sonny Gray, left, of the Cincinnati Reds, and Brandon Woodruff, of the Milwaukee Brewers, compare their baseball holds during batting practice for the MLB All-Star baseball game, Monday, July 8, 2019, in Cleveland. The game will be played Tuesday. (AP Photo/Tony Dejak)

A look at what's happening around the majors Friday:

No Gray area in this pitching matchup Friday - only shades of Gray.

Sonny will take the mound for the Cincinnati Reds in his first visit to Coors Field and first time facing Colorado. Jon will go for the Rockies as both teams return from the All-Star break.

The Cardinals placed catcher Yadier Molina on the injured list with a strained right thumb and activated infielder Matt Carpenter as part of a series of roster moves Thursday. St. Louis also brought up left-hander Chasen Shreve from Triple-A Memphis, optioned left-hander Tyler Webb and outfielder Rangel Ravelo to Memphis, and transferred pitcher Jordan Hicks to the 60-day IL update ahead of their series against Arizona beginning Friday night.

STREAKING AND A LOT OF KS

Astros All-Star right-hander Gerritt Cole (9-5) is the AL leader with 170 strikeouts and has won his past five decisions. In his previous start before the All-Star break, Cole threw seven scoreless innings and struck out nine Saturday night in a win over the Los Angeles Angels. His first post-break start comes in the second game of a four-game series against the AL West-rival Rangers. Cole has 29 strikeouts over 16 1/3 innings in three starts this season against Texas, but is 1-2 with a 6.61 ERA in those games. In his eight career starts against the Rangers, he is 4-2 with a 3.72 ERA and 78 strikeouts over 48 1/3 innings.