Back from minors, lefty Kyle Freeland eager for fresh start 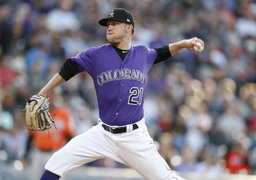 FILE--In this Saturday, May 25, 2019, file photo, Colorado Rockies starting pitcher Kyle Freeland works against the Baltimore Orioles in the first inning of a baseball game in Denver. Freeland has been brought back to the Rockies after spending two months at the team's Triple-A affiliate in Albuquerque, N.M. (AP Photo/David Zalubowski, File)

DENVER (AP) Kyle Freeland found his command - and his way back to Denver.

The left-hander will take the mound for the Colorado Rockies on Saturday at Coors Field after a month in the minors working on his control. He thinks he rediscovered something resembling his old form - the one that led to a fourth-place finish in the NL Cy Young Award voting a year ago - during his last start at Triple-A Albuquerque. In that July 3 outing, Freeland allowed one run over seven innings and struck out nine.

''It was one of those starts where everything really came together, with my arsenal, mechanics, pitch mix, everything was working good,'' said Freeland, who went 0-4 with an 8.80 ERA in six starts with the Isotopes. ''It was how I wanted to see myself pitch. And then you look at the results and they were good as well.''

Freeland won't officially be added to the roster until Saturday. A corresponding roster move will be made before his start against Cincinnati.

The 26-year-old Denver native looked at his time away from the big leagues as a chance to clear his mind. He was 2-6 with a 7.13 ERA when he was sent down.

''You can look at is a little bit of a reset. But at the same time, the first two months, they're still there,'' Freeland said. ''That happened. It's history. It's over with. Right now, it's looking forward, taking it one step at a time.''

Rockies manager Bud Black had a recent chat with Freeland about keeping his composure as he makes a fresh start. There's no pressure and he doesn't want his opening-day starter to be too amped up.

To chase a playoff spot, Colorado needs the version of Freeland from a year ago when he went 17-7 with a 2.85 ERA. Freeland started the NL Wild Card Game in Chicago and threw 6 2/3 shutout innings to help the Rockies beat the Cubs 2-1 in 13.

''Kyle just needs to go out and be Kyle Freeland and pitch his game,'' Black said. ''I told him as such, `You're going to be fired up tomorrow night. It's going to be emotional for you.' I tried to temper that a little bit with our conversation.

''Regardless of what happens, it's good to have him back on the team. We need him. I think he needs us, which is a good thing. ... He's in a really good place. We're excited.''

Asked how he's doing in the confidence department, Freeland responded: ''Better. A lot better. When you're sent down, it's not a good feeling. You have to take it as much of a positive as you can and go into your work and make sure you're doing things right and working on things you need to work on to get back to the person you want to be.''

Freeland said he leaned on the support of veteran catcher Drew Butera, who was behind the plate for all of his starts with Albuquerque.

''You never see him have a negative mindset,'' Freeland said of Butera's calming influence. ''Always being positive, always wanting to talk to you, learn for himself and help you learn, too.''

One thing Freeland learned: Pinpoint pitches sometimes get crushed. Freeland allowed 16 homers over 59 1/3 innings while with the Rockies.

''I think I was slightly predictable,'' Freeland said. ''I think hitters had a pretty solid book and game plan going into games against me. At the same time, I was leaving a lot of mistakes over the middle of the plate. You put those two together and more than likely the ball is going to be flying out.''

He said he found out he was rejoining the Rockies a few days after his last minor league start.

''It's a nice breath of fresh air, to know I'm coming back here,'' Freeland said. ''I want to help contribute.''