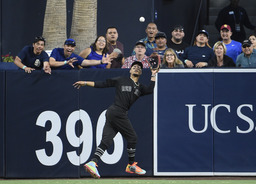 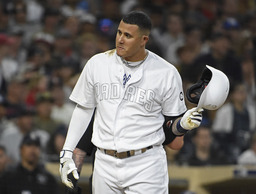 San Diego Padres' Manny Machado tosses his helmet after striking out during the fifth inning of a baseball game against the Boston Red Sox, Saturday, Aug. 24, 2019, in San Diego. (AP Photo/Denis Poroy) 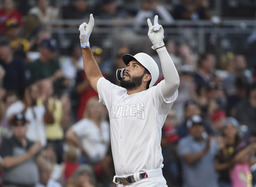 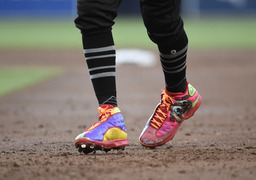 Boston Red Sox's Mookie Betts gets back to first base wearing custom cleats during the second inning of a baseball game against the San Diego Padres, Saturday, Aug. 24, 2019, in San Diego. (AP Photo/Denis Poroy) 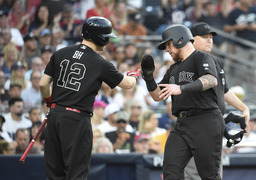 The defending World Series champion Red Sox blew a 4-0 lead before Holt put them ahead again by hitting his third homer of the season to open the ninth. The ball sailed over right fielder Hunter Renfroe and into the Home Run Deck. Yates dropped to 0-4.

The Red Sox have beaten the Padres in seven of their last eight meetings and lead the overall series 14-6.

Matt Barnes (4-4) pitched the eighth for the win and Brandon Workman pitched the ninth for his eighth save. Workman struck out Eric Hosmer for the final out with runners on first and second.

Boston took a 4-0 lead against Dinelson Lamet after four innings but the Padres chased Red Sox starter Nathan Eovaldi during the three-run fourth and tied it in the seventh against two relievers.

Luis Urias opened the seventh with a walk and advanced when pinch-hitter Francisco Mejia was hit by a pitch by Ryan Brasier, who was replaced by Josh Taylor. Rookie pinch-hitter Ty France singled to left to bring in Urias with the tying run. The Padres loaded the bases with two outs before Eric Hosmer struck out.

Mookie Betts started the scoring for the Red Sox in the third when he singled in Brock Holt, who was hit by a pitch.

The first four Boston batters reached in the fourth. J.D. Martinez singled, Andrew Benintendi walked and Christian Vazquez brought them both in with a double to center. Mitch Moreland singled in Vazquez.

The Padres closed within one run in the third, which was highlighted by Hosmer's two-run home run to right, his 19th, that chased Eovaldi. Manny Machado was aboard on a leadoff single. Marcus Walden came on and allowed a double by Renfroe, who advanced on Manuel Margot's fly ball to center and scored on Urias' groundout.

Eovaldi allowed two runs and four hits in three-plus innings, struck out three and walked one.

Red Sox: Were expected to name Sunday's starter after this game.

Padres: LHP Joey Lucchesi (8-7, 4.20) is scheduled to start the series finale. In his last start, last Sunday at Philadelphia, he recorded his first win since July 7 at the Los Angeles Dodgers.