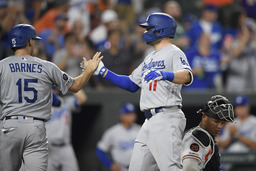 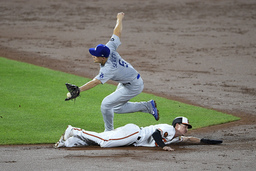 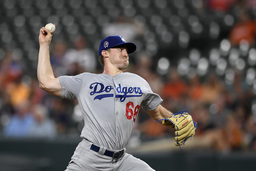 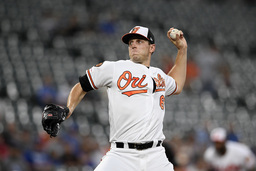 Villar's drive off Caleb Ferguson (1-2) was the 6,106th in the majors this season, breaking the previous mark of 6,105 in 2017. The milestone shot came on a fastball that Villar sent deep into the left-field seats to snap a 2-2 deadlock.

Pedro Severino added a two-run drive in the eighth.

Having clinched the NL West title on Tuesday night before indulging in an alcohol-themed celebration, the Dodgers did not appear to play with their usual intensity.

Manager Dave Roberts rested starters Joc Pederson and Justin Turner, starting pitcher Ross Stripling toiled for only three innings before getting the rest of the night off and a first-inning double by David Freese was Los Angeles' only hit off John Means through the fifth.

Roberts used seven pitchers. The Dodgers finished with six hits, the most notable a two-run drive by A.J. Pollock that made it 2-1 in the sixth.

In the bottom half, Joe Kelly walked the leadoff batter, threw a wild pitch and gave up a two-out RBI single to Dwight Smith Jr.

The victory was Baltimore's 47th of the season, matching its total from last year. The Orioles remain two defeats away from their second straight 100-loss season.

Roberts is in the midst of his fourth straight 90-win season with Los Angeles. Baltimore manager Brandon Hyde is striving to win 50 games in his first year with the rebuilding Orioles.

Hyde, who won a World Series ring as a coach with the Chicago Cubs, can appreciate what it takes to be a constant winner.

Dodgers: Turner (ankle) remained out of the lineup. Roberts said X-rays were inconclusive and that Turner would undergo an MRI exam. ''Right now, with where we're at, to push it doesn't make a whole lot of sense,'' Roberts said. ... INF Max Muncy (fractured wrist) is expected to rejoin the team Friday in New York. Muncy, who has 33 HRs and 87 RBIs, has been hitting live pitching in Arizona this week.

Dodgers: LHP Rich Hill (4-1, 2.55 ERA), who is 2-0 with an 0.87 ERA in 12 lifetime appearances against Baltimore, returns from a forearm strain Thursday night to make his first appearance since June 19 in the finale of the three-game series.