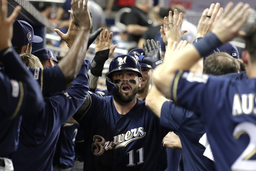 Milwaukee Brewers' Mike Moustakas (11) is congratulated after hitting a two run home run during the ninth inning of a baseball game against the Miami Marlins, Wednesday, Sept. 11, 2019, in Miami. The Brewers won 7-5. (AP Photo/Lynne Sladky) 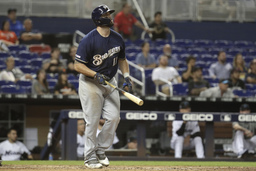 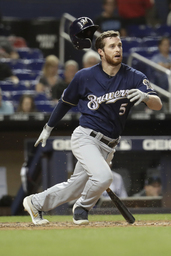 Milwaukee Brewers' Cory Spangenberg (5) loses his helmet as he grounds out to first during the fourth inning of a baseball game against the Miami Marlins, Wednesday, Sept. 11, 2019, in Miami. (AP Photo/Lynne Sladky) 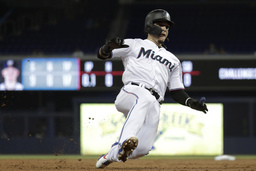 Miami Marlins' Isan Diaz slides safely into third, advancing on a single by Garrett Cooper during the first inning of the team's baseball game against the Milwaukee Brewers, Wednesday, Sept. 11, 2019, in Miami. (AP Photo/Lynne Sladky) 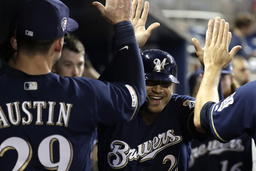 Milwaukee Brewers' Trent Grisham is congratulated after hitting a solo home run during the first inning inning of the team's baseball game against the Miami Marlins, Wednesday, Sept. 11, 2019, in Miami. (AP Photo/Lynne Sladky)

The Brewers won their sixth in a row. They began the day one game behind Chicago for the second NL wild-card spot.

Yelich, the reigning National League MVP, broke his right kneecap in Tuesday night's game when he fouled a ball off himself. He returned to Milwaukee earlier Wednesday for additional tests.

Trent Grisham, one of the outfielders expected to get additional playing time in Yelich's absence, led off the game with a home run.

It was 5-all when Moustakas drove a fastball from Miami reliever Jose Urena (4-9) into the upper deck in right-center field for his 33rd homer. Urena retired the first two hitters before he walked Yasmani Grandal.

Moustakas returned to the starting lineup on his 31st birthday, playing for the first time since Sept. 2 after recovering from a sprained left wrist. He a three-run homer off starter Pablo Lopez in the third put Milwaukee ahead 4-2.

Brent Suter (2-0) pitched three innings of scoreless relief for the win. Josh Hader struck out the side in the ninth for his 30th save.

An RBI single by Zach Davies put Milwaukee ahead 5-2 in the fourth.

For the third consecutive game, a Milwaukee starter was lifted with a lead before finishing the fifth. Alex Claudio relieved Davies with one out in the fifth and allowed Isan Diaz's two-run homer. Jay Jackson came in after Claudio's one-batter outing and gave up Garrett Cooper's tying solo homer.

Magneuris Sierra's RBI single in the second gave the Marlins their first lead of the series at 2-1. Sierra drove in Harold Ramirez, who reached on a leadoff triple.

Brewers: LHP Gio Gonzalez (2-2, 3.98) will start the series finale Thursday. Of his last 10 starts, Gonzalez has factored in one decision.