Braves don't give out tomahawks after Helsley's complaint 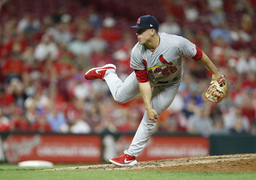 In this Aug. 15, 2019, file photo, St. Louis Cardinals relief pitcher Ryan Helsley throws against the Cincinnati Reds during the eighth inning of a baseball game in Cincinnati. Helsley was disappointed by his first exposure to the Atlanta Braves fans use of the Tomahawk Chop for their chants during games. Helsleys vantage point is different than most players who visit SunTrust Park. He is a member of the Cherokee nation. (AP Photo/Gary Landers, File)

ATLANTA (AP) The Atlanta Braves have not distributed their traditional red foam tomahawks to fans before Game 5 of their NL Division Series against the St. Louis Cardinals.

The foam cutouts are used when Braves fans perform their Tomahawk Chop chant in games.

The Braves say in a statement the change is ''out of respect for the concerns'' expressed by Cardinals pitcher Ryan Helsley, a member of the Cherokee Nation who says he finds the chant insulting.

Fans still used the chant with the Cardinals' first batter, Dexter Fowler, at the plate.

The Braves also say they won't play the music that accompanies the chant when Helsey is in the game.

Helsley, a native of Tahlequah, Oklahoma, speaks the Cherokee language and is one of only a few Native Americans in the majors.

The reliever said last week he was shocked to hear the chant, a part of the Braves' tradition since it was borrowed from Florida State in the early 1990s.