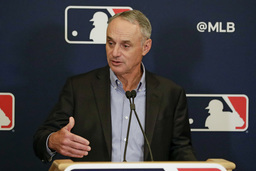 In this Feb. 6, 2020, file photo, Major League Baseball Commissioner Rob Manfred answers questions at a news conference during MLB baseball owners meetings in Orlando, Fla. Major League Baseball will cuts its amateur draft from 40 rounds to five this year, a move that figures to save teams about $30 million. Clubs gained the ability to reduce the draft as part of their March 26 agreement with the players association and MLB plans to finalize a decision next week to go with the minimum, a person familiar with the decision told The Associated Press. The person spoke Friday, May 8, 2020, on condition of anonymity because no decision was announced. (AP Photo/John Raoux, File) 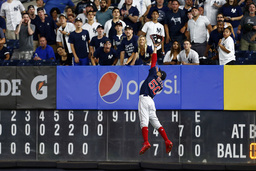 In this Sunday, Aug. 4, 2019, file photo, Boston Red Sox right fielder Mookie Betts makes a leaping catch on a ball hit by New York Yankees' DJ LeMahieu during the eighth inning of a baseball game in New York. With the sports calendar still mostly on hold because of the coronavirus pandemic, The Associated Press takes a look at some of the live sporting events that would have taken place the week of May 4-10, 2020, including the season's first meeting between the Red Sox and Yankees, in The Bronx. (AP Photo/Adam Hunger, File)

In this Thursday, March 26, 2020, file photo, Oriole Park at Camden Yards is closed on what would've been Opening Day in Baltimore, Md. Whenever baseball returns because of the coronavirus pandemic, there's an element that might come into play like never before: the sound of silence. (AP Photo/Steve Helber, File)

NEW YORK (AP) Major League Baseball owners gave the go-ahead Monday to making a proposal to the players’ union that could lead to the coronavirus-delayed season starting around the Fourth of July weekend in ballparks without fans, a plan that envisioned expanding the designated hitter to the National League for 2020.

Spring training would start in early to mid-June, a person familiar with the decision told The Associated Press. The person spoke on condition of anonymity because details of the plan were not announced.

Each team would play about 82 regular-season games, most against opponents in its own division with interleague matchups limited to AL East vs. NL East, AL Central vs. NL Central and AL West vs. NL West.

Postseason play would be expanded from 10 clubs to 14 by doubling wild cards in each league to four.

Teams would prefer to play at their regular-season ballparks but would switch to spring training stadiums or neutral sites if medical and government approvals can’t be obtained for games at home. Toronto might have to play home games in Dunedin, Florida.

The All-Star Game, scheduled for Dodger Stadium in Los Angeles on July 14, likely would be called off.

Teams will propose that players receive a percentage of their 2020 salaries based on revenues MLB receives during the regular-season and postseason, which likely will be among the most contentious aspects of the proposal during negotiations with the players’ association.