AP source: World Baseball Classic to be postponed till 2023 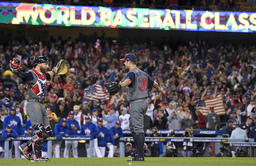 NEW YORK (AP) The World Baseball Classic will be postponed from 2021 to 2023 because of the new coronavirus, a person familiar with the planning tells The Associated Press.

The person spoke on condition of anonymity Monday because no announcement had been made. The decision, first reported by ESPN Deportes, must be approved by the WBC board of directors, which is expected. The board includes representatives of Major League Baseball, the Major League Baseball Players Association, the World Baseball Softball Confederation, Nippon Professional Baseball and the Korea Baseball Organization.

The fifth edition of the tournament was scheduled for next March 9-23 in Taiwan, Tokyo, Phoenix and Miami. The Marlins were to host the semifinals and final along with half of the quarterfinals, which also were to be played in Tokyo.

Qualifying had been scheduled for this past March but was postponed due to the pandemic.

The United States won the tournament for the first time in 2017 following titles by Japan in 2006 and 2009 and the Dominican Republic in 2013.