Texas artists will be in Rangers lot for drive-in concerts 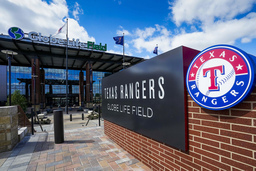 This photo shows an exterior view of an entrance to Globe Life Field in Arlington, Texas, Tuesday, March 31, 2020. The Texas Rangers would have played the Los Angeles Angels on Tuesday, in what would have been the opening day for the new ballpark, before the season was postponed due to the new coronavirus. (Smiley N. Pool/The Dallas Morning News via AP, Pool)

ARLINGTON, Texas (AP) Texas Rangers season ticket holder Pat Green will be among the Texas artists who will play a series of drive-in concerts in the parking lot of the team's new stadium that has not yet hosted a baseball game because of the coronavirus pandemic.

Eli Young Band, Whiskey Myers, along with Josh Abbott Band and Kevin Fowler, will also do hour-long acoustic sets during the Concert In Your Car series June 4-7 at Globe Life Field.

Organizers said Tuesday that 400 vehicles will be allowed in for the shows each night, with fans having to remain in their vehicles and listen to the performances through FM radio signals. General admission tickets, for $40 per vehicle, will have to be bought online in advance and will be scanned through the window for entry.

The parking lot being used, located between the new Globe Life Field and the team's former home,

, could hold 800 to 1,000 vehicles. The capacity is being limited to allow plenty of room for social distancing. There will be no concessions or merchandise sales.

The first scheduled event at the new $1.2 billion stadium, which is also adjacent to the home stadium of the NFL's Dallas Cowboys, was supposed to be a Chris Stapleton show on March 14 that included Willie Nelson. That concert was postponed, and later rescheduled for Nov. 21 due to the COVID-19 outbreak.

High schools from several North Texas districts will hold graduation ceremonies inside the new baseball stadium, including some on the same days as the drive-in concerts that will begin at 9 p.m. each night.

Eli Young Band will perform the first concert June 4, followed the next night by Whiskey Myers. Green will perform June 6, with Josh Abbott Band and Fowler wrapping up the series June 7.

It is still unclear when the Rangers will play their first game there.