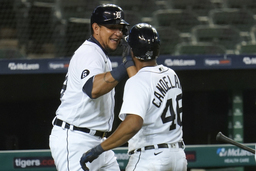 Detroit Tigers' Miguel Cabrera and Jeimer Candelario (46) celebrate scoring on a Niko Goodrum double in the sixth inning of a baseball game against the Chicago Cubs in Detroit, Wednesday, Aug. 26, 2020. (AP Photo/Paul Sancya) 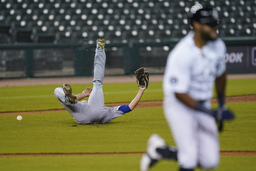 DETROIT (AP) Niko Goodrum hit a two-run double to cap Detroit's five-run sixth inning, and the Tigers held on for a 7-6 victory over the Chicago Cubs on Wednesday night.

Three major league games were postponed Wednesday as players reacted to the weekend shooting by police of Jacob Blake, a Black man, in Wisconsin. The Tigers and Cubs played on, but Chicago outfielder Jason Heyward was scratched from the lineup prior to the game. The Cubs said Heyward talked with manager David Ross and decided not to play.

Heyward was expected to talk to reporters after the game. As the Cubs took the field between the top and bottom of the seventh, there was a stretch of silence in which the music and piped-in crowd noise were halted, while the words ''UNITED FOR CHANGE'' appeared on the video board in left field.

The Cubs trailed 7-3 entering the ninth, but Nico Hoerner hit an RBI single and Albert Almora added a run-scoring double. An infield single by Ian Happ put the tying run on first with nobody out, then Anthony Rizzo hit a sacrifice fly that center fielder Victor Reyes caught against the wall, some 420 feet from the plate.

The next two hitters went down in order. Detroit pitcher Buck Farmer snagged Kyle Schwarber's line drive to end it.

Schwarber homered for the Cubs, who led 3-1 before imploding in the sixth. Catcher Willson Contreras failed to catch a foul popup near the screen, and that misplay proved costly when the Tigers scored four runs with two outs.

Joe Jimenez (1-1) allowed Schwarber's solo homer in the sixth but got the win in relief. Ryan Tepera (0-1) took the loss.

The NL Central-leading Cubs opened the scoring with two runs in the third off Detroit starter Michael Fulmer. Rizzo hit an RBI single, and Javier Baez followed with a sacrifice fly.

Romine made it 2-1 with an RBI single in the fourth, but Schwarber hit a solo homer two innings later.

Jon Lester allowed a run and eight hits in five innings for the Cubs, but he was replaced by Rowan Wick, and the lead quickly vanished. Maybin led off the Detroit sixth with a double, and when Romine hit a foul pop, Contreras had time to get under it but failed to catch it.

If that play had been made, Detroit might not have scored at all in the inning. Instead, Romine hit an RBI double, and after two groundouts, Schoop hit a run-scoring single off Tepera. Cabrera followed with a single, then Jeimer Candelario hit an RBI single and took second on an error by Happ in right.

Goodrum, who had struck out in his first three plate appearances, doubled to make it 6-3.

Chicago's sloppy inning wasn't over yet. Tepera fell down while trying to field a dribbler by Jorge Bonifacio, allowing the Detroit hitter to reach on an infield single.

Cabrera added an RBI single in the seventh.

Tigers: OF JaCoby Jones, who left Tuesday's game with tightness in his right calf, had the night off.

The Cubs have Thursday off before starting a series at Cincinnati on Friday night.

Detroit opens a home series against Minnesota on Thursday night. Matthew Boyd (0-4) starts for the Tigers against Randy Dobnak (5-1).