Column: Remembering the last series to be played in one park 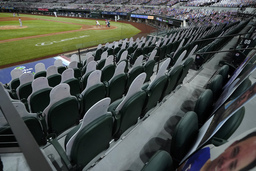 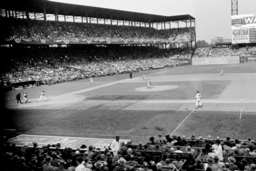 This Oct. 4, 1944, file photo shows St. Louis Cardinals' Ray Sanders striking out on a pitch from St. Louis Browns' Denny Galehouse during the first inning of the first game of the World Series at Sportsman's Park in St. Louis. The last time the World Series was held in a single ballpark was in 1944. (AP Photo/File) 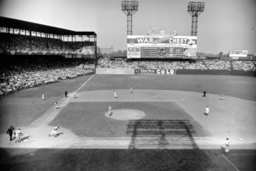 In this Oct. 4, 1944, file photo, St. Louis Cardinals' Danny Litwhiler heads to first base as St. Louis Browns third baseman Mark Christman fields his ground ball before forcing out Browns' Ray Sanders, heading to third, for the third out during the third inning in the opening game of the 1944 World Series at Sportsman's Park in St. Louis, Mo. The Browns won 2-1. The last time the World Series was held in a single ballpark was 1944. (AP Photo/FIle) 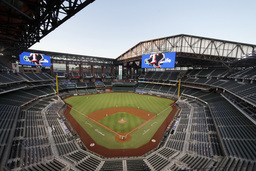 The Seattle Mariners play the Texas Rangers in the first inning of a baseball game at Globe Life Field in Arlington, Texas, Monday, Aug. 10, 2020. The World Series will be played entirely at the Texas Rangers new ballpark in Arlington, Texas, as part of a bubble agreement between Major League Baseball and the players association, the first time the sports championship will be played entirely at one site since 1944. As part of an agreement finalized Tuesday, Sept. 15, 2020, the Division Series, League Championship Series and World Series will be part of a bubble designed to minimize exposure to the coronavirus. (AP Photo/Tony Gutierrez, File)

The last time the World Series was held in a single ballpark, there was a bit of a conundrum over where the two managers would stay.

It was 1944. World War II was raging. The major leagues carried on with rag-tag rosters. And the lowly St. Louis Brown actually managed to win the AL pennant.

That set up a ''Streetcar Series'' against St. Louis' far more popular Cardinals, who cruised to the NL pennant while sharing Sportsman Park with the Browns.

Here's the catch: Since there was a shortage of housing during the war, and the teams were never at home at the same time during the regular season, the two managers - Luke Sewell of the Browns and Billy Southworth of the Cardinals - shared an apartment.

Of course, they'd both have to be in St. Louis for the World Series.

''However admirable this display of interleague cooperation might have appeared during the season, it would never do for the opposing managers to sit in the same living room after a World Series game, sipping bourbon and chatting politely with their wives,'' wrote William B. Mead in his book ''Even The Browns: The Zany, True Story of Baseball in the Early Forties.'''

''Besides, Sewell wanted to invite his mother, and Mrs. Southworth could hardly be expected to put up with a mother-in-law from the wrong family and, indeed, the wrong league.''

Fortunately, according to Mead, another resident of the apartment building was out of town for the month. The Southworths were able to move into the unoccupied unit during the series, snuffing out that potential crisis.

Managerial housing is not likely to be an issue when this year's World Series is held entirely at Globe Life Field in Arlington, Texas because of the coronavirus pandemic. But there will be plenty of other logistical matters to sort out at the neutral-site series - most notably, whether fans will be able to attend after a season in which all games have been played in empty stadiums.

Seventy-six-years ago, Sportsman Park was packed over six straight days - no need for travel days with both teams at home - for what would be the only all-St. Louis World Series.

(The only other ballpark to host an entire World Series was the Polo Grounds, where the New York Giants defeated their then-tenants, the New York Yankees, in 1921 and 1922. Yankee Stadium opened in 1923, and the rest is history.)

Mayor Aloys P. Kaufmann proclaimed the week beginning Oct. 2, 1944, as ''St. Louis Baseball Week.'' The city pretty much ground to a halt to cheer on its two teams as they battled for baseball's ultimate crown.

''Reserved seat tickets were snapped up at six for $37.50, and scalped at six for $150,'' Mead wrote. ''The center-field bleachers, kept empty during most games to provide a dark background for the hitters, were sold out for the Series. Shirt-sleeve weather would mean a background of white shirts, ideal for fast overhand pitchers'' such as Mort Cooper and Max Lanier of the Cardinals and Denny Galehouse of the Browns.

The Cardinals were heavy favorites, having cruised to their third straight pennant with a record of 105-49. While many top players had enlisted or been drafted into the war effort, the Cards still had a notable cast of superstars, including future Hall of Famer Stan Musial and league MVP Marty Marion.

The Browns, long one of the AL's worst teams, assembled a vagabond roster that got the most out of its talent. While the Cardinals romped to the NL title by 14 1/2 games, the AL pennant race came down to the final day. The Browns defeated the New York Yankees 5-2 before an overflow crowd of more than 35,000 at Sportsman Park, by far the largest turnout of the season. They finished 89-65, edging Detroit by a single game.

''They won largely on pluck, getting more runs out of their hits than any team in the league,'' wrote Mead, who died two years ago. ''The Browns' team batting average of .252 was seventh in the American League, but they finished second to Boston in runs scored.''

In the World Series, the Browns actually grabbed a 2-1 lead behind stellar pitching performances from Galehouse in Game 1 and Jack Kramer in Game 3. But the Cardinals limited the Browns to only two runs over the final three games to take the championship, four games to two.

Afterward, Browns owner Don Barnes and general manager Bill DeWitt went over to the office of Cardinals owner Sam Breadon - right down the hall, we presume - to offer their congratulations.

Breadon's response: ''If we'd have lost this Series to the Browns, I'd have had to leave town. It would have been a disgrace to lose to the Browns.''

Turns out, it was the Browns who eventually left town. They managed only one more winning season - in 1945, the final year of the war, when they famously signed one-armed Pete Gray to play the outfield - before sinking back into obscurity as life returned to normal. The franchise moved to Baltimore after the 1953 season, transforming into the far-more successful Orioles.

In their final season in St. Louis, the Browns finished last in the AL with record of 54-100. They also brought up the rear in attendance, drawing just 297,238 to the park they shared with the Cardinals.

In the annals of baseball history, the Browns are barely a footnote. But let's hope Major League Baseball can find time to honor this woeful franchise at this year's World Series.

Just a little remembrance of that one glorious season when they shared the biggest stage of all.