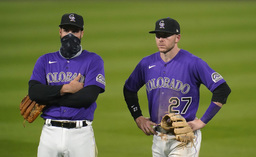 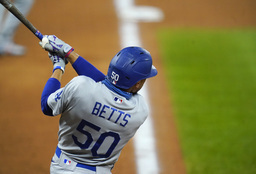 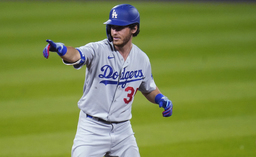 Los Angeles Dodgers' Cody Bellinger gestures to the dugout after pulling into second base with a double off Colorado Rockies relief pitcher Wade Davis to lead off seventh inning of a baseball game Friday, Sept. 18, 2020, in Denver. The Dodgers won 15-6. (AP Photo/David Zalubowski) 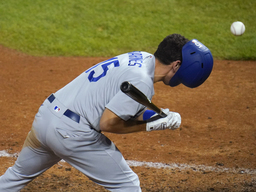 Los Angeles Dodgers' Austin Barnes loses his batting helmet after being clunked on the upper back by a pitch from Colorado Rockies' Ryan Castellani during the fifth inning of a baseball game Friday, Sept. 18, 2020, in Denver. (AP Photo/David Zalubowski) 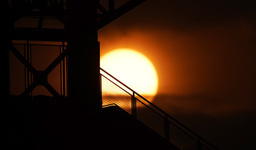 As smoke from wildland fires from across the American West fills the sky, the sun casts an orange glow as it sets, with the stands of Coors Field in the foreground during the first inning of a baseball game between the Los Angeles Dodgers and the Colorado Rockies on Friday, Sept. 18, 2020, in Denver. (AP Photo/David Zalubowski)

DENVER (AP) For his prodigious power, the 5-foot-9 Mookie Betts credits listening to his parents in the backyard.

''When I was a kid, 4 or 5 years old, mom and dad would always tell me hit it over their head,'' Betts explained.

He's been doing that to everyone ever since.

Betts hit his NL-leading 16th homer and the Los Angeles Dodgers set a season high for runs in their 15-6 romp past the Colorado Rockies on Friday night to move closer to clinching their eighth straight NL West title.

The Dodgers' magic number for wrapping up the division dropped to four. They were already the first team to secure a playoff spot this season.

They're hitting their stride at the ideal time.

''You can't just turn it on at playoffs,'' Betts said. ''You have to play throughout the season the same way you're going to play in the playoffs. ... We're doing a good job with that. We have to continue to do it.''

Cody Bellinger had three of LA's season-high 17 hits, including his first homer since Aug. 30 and a double. He also added an RBI single as part of a five-run fifth inning that broke open the game.

''It's a huge night for him to get results,'' Dodgers manager Dave Roberts said. ''I know he's going to sleep well tonight. Over the last few days, I think he's been swinging the bat better. I'm just happy to see him smiling and laughing.''

Gavin Lux had a two-run homer in the second, while Betts delivered a solo shot in the sixth to increase the Dodgers' major league-leading homer total to 98. Every starter in the lineup had a hit and all but AJ Pollock scored a run.

''Everybody can hurt you,'' said Betts, who added a two-run triple in the seventh. ''There's nobody you can say, `OK, I'm going to attack this guy, pitch around this guy.' You'd pretty much have to pitch around everybody.''

It was a bullpen game for the Dodgers, who started with Alex Wood and then used six relievers. Mitch White, who was recalled Friday, pitched two scoreless innings to earn his first big league win.

Josh Fuentes had a three-run homer for Colorado as part of his three-hit night. Fuentes, who's the cousin of Nolan Arenado, is hitting .339.

''With Josh, he's doing a lot of good things,'' Rockies manager Bud Black said. ''He's coming to the park every day with a great winning attitude. It's really great to see.''

Ryan Castellani (1-3) struggled with his command in allowing eight runs, seven earned, over 4 1/3 innings. He walked three and hit Austin Barnes in the back/neck area.

Colorado fell to 11-17 at Coors Field this season. With two games left, the team will finish below .500 at home for the ninth time in franchise history.

The team remains in the wild-card chase despite dropping five of its last six.

''The mood is one of frustration that we're not putting it all together,'' Black said. ''We feel as though we're in a race with five, six teams that are battling for a couple spots and we're not getting it done.''

Dodgers: 3B Justin Turner was given the night off but was expected to be the designated hitter Saturday. He recently returned from the injured list after dealing with a strained left hamstring.

To make room on the roster for White, the team optioned righty Josh Sborz. ... OF Chris Taylor drove in three runs. ... The Rockies sent minor league right-hander Jacob Wallace to Boston to compete the Aug. 31 trade for outfielder Kevin Pillar. ... OF David Dahl had a two-run triple in the sixth.

Roberts said out of high school he was all set to be an option quarterback at the Air Force Academy. But at the last moment, he decided to attend UCLA to play baseball. Roberts would go on to plays 10 seasons in the majors and hit .266.

The Division Series, League Championship Series and World Series all will be part of a bubble designed to minimize exposure to the coronavirus. One of the spots will be Los Angeles' Dodger Stadium.

Asked if he had any tips or advice for visiting teams playing at Dodger Stadium, shortstop Corey Seager respectfully declined.

''I can't give those secrets away,'' Seager said. ''That's an advantage for them. I don't want to give them anything.''