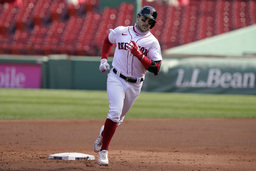 Boston Red Sox's Michael Chavis runs the bases toward home after hitting a two-run home run off a pitch by New York Yankees' Deivi Garcia in the second inning of a baseball game Sunday, Sept. 20, 2020, in Boston. (AP Photo/Steven Senne) 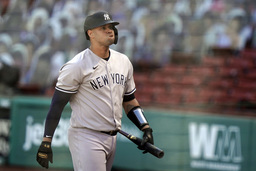 New York Yankees' Gary Sanchez reacts after he struck out swinging in the fifth inning of a baseball game against the Boston Red Sox, Sunday, Sept. 20, 2020, in Boston. (AP Photo/Steven Senne) 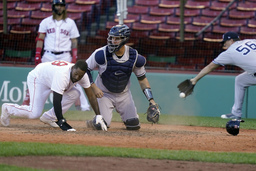 Boston Red Sox's Jackie Bradley Jr., left, scores on a sacrifice fly by Tzu-Wei Lin as New York Yankees' Gary Sanchez, center, looks on while Yankees' Jonathan Holder, right, tries to get his glove on the ball in the seventh inning of a baseball game, Sunday, Sept. 20, 2020, in Boston. (AP Photo/Steven Senne) 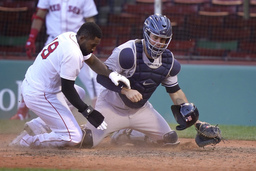 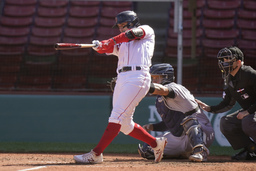 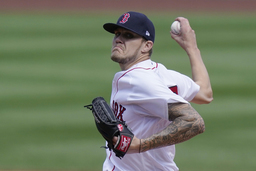 Boston Red Sox's Tanner Houck winds up for a pitch against the New York Yankees in the first inning of a baseball game, Sunday, Sept. 20, 2020, in Boston. (AP Photo/Steven Senne) 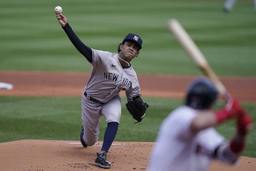 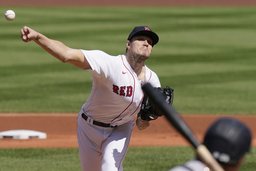 BOSTON (AP) Despite dismal results against the New York Yankees this season, at least the Boston Red Sox didn't have to watch their longtime rivals enjoy clinching a playoff berth at Fenway Park.

They made sure of that by finally beating the Yankees this year.

Tanner Houck took a no-hitter into the sixth inning of his second major league start and Michael Chavis had a huge day at the plate as the Red Sox halted two long streaks with a 10-2 victory Sunday.

''A great experience. It's a great rivalry that I remember watching growing up. Being a part of it was amazing,'' Houck said. ''Going deep into the game like that with a no-hitter is truly an unbelievable experience.''

Chavis hit two homers over the Green Monster and drove in five runs. Jackie Bradley Jr. went 4 for 5, and J.D. Martinez and Bobby Dalbec each had a solo shot.

It was Boston's first win over the Yankees this season in their last of 10 meetings. New York had matched its longest winning streak against the Red Sox, also winning 12 in a row in 1936 and from 1952-53 when Red Sox Hall of Famer Ted Williams was flying combat missions in the Korean War.

The Yankees' magic number remained at one to lock up a playoff spot. A loss by Seattle later Sunday would earn them a postseason berth for the fourth straight year. New York stayed 3 1/2 games behind AL East-leading Tampa Bay, which lost 2-1 in Baltimore.

Luke Voit hit his major league-leading 21st homer for the Yankees, who outscored their opponents 85-25 during the winning streak.

In a matchup of right-handed prospects on a breezy afternoon, the 24-year-old Houck mixed a sharp slider, sinker and a fastball in the low-to-mid 90 mph range to keep the Yankees off balance until Tyler Wade lined a double into the right-center gap.

''Seeing that against a really hot offense like these guys have had, it's great to see that stuff,'' Boston manager Ron Roenicke said.

Houck (2-0) gave up just that one hit and an unearned run. He struck out four and walked three in six innings.

''He's got good stuff,'' Yankees manager Aaron Boone said. ''I thought maybe we expanded a little bit on some pitches off the plate. He did a good job of working his two-seamer in, and then even changeup off of that. But he was tough.''

In his big league debut at Miami on Tuesday, Houck held the Marlins to two hits over five scoreless innings, striking out seven.

Deivi Garcia (2-2) was roughed up for six runs and eight hits over three innings in his fifth career start. He felt his command was off.

''I battled with that today,'' he said through a translator. ''It kept me from being as aggressive as I wanted to be.''

With the Red Sox leading 3-0 in the third, Chavis hit a hanging slider that landed in the first row of seats above the Green Monster in left field.

Chavis' first homer came on a belt-high slider in the second and left Fenway completely.

''Just a bump here for him, but all things he can correct, and go out and do what we've seen in his next one,'' Boone said about Garcia.

There was about a 10-minute delay with the Yankees batting in the eighth when someone started screaming from a camera stand above the center-field bleachers. They threw something onto the field. The umpires gathered at home plate until the person was removed.

Garcia took the mound where his boyhood idol and fellow countryman, Pedro Martinez, spent much of his Hall of Famer career. The 21-year-old righty from the Dominican Republic even has number 45 - the number Martinez wore - written on the front of his belt.

Yankees: OF Aaron Judge was not in the lineup. A strained calf limited him to one game between Aug. 11 and his return Wednesday. He played the first two games of the series, going 1 for 9 with two runs, three strikeouts and two walks. . C Gary Sanchez was shaken up by a foul ball that ricocheted off his left arm and then neck, but he stayed in.

Red Sox: Roenicke gave SS Xander Bogaerts the day off and said OF Alex Verdugo (left hamstring soreness) and 2B Christian Arroyo (back spasms) were unavailable.

Yankees: Open a four-game series Monday against the Blue Jays at Toronto's home this season in Buffalo, New York. Boone hadn't announced a starter yet.

Red Sox: Off on Monday before beginning their final home series, a three-game set that starts Tuesday against Baltimore. RHP Nick Pivetta, acquired in a trade with the Phillies last month, will make his Red Sox debut.