Rough opening night: Rays use opener, get burned in Game 4 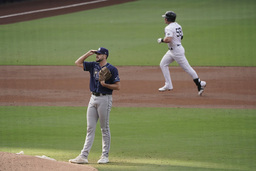 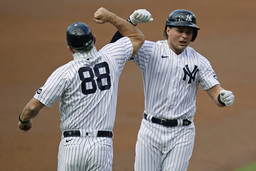 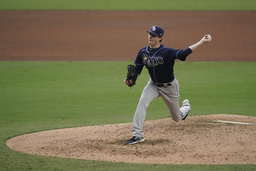 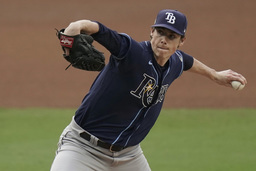 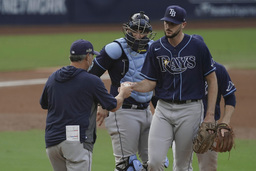 SAN DIEGO (AP) Manager Kevin Cash and the Tampa Bay Rays introduced the concept of an opener to modern baseball two years ago.

With a chance to close out their AL Division Series against the Yankees on Thursday night, they were bitten by their own creation.

The Rays fell behind in the second inning of Game 4 and never caught up after rookie opener Ryan Thompson gave up two hits, three walks and two runs over 1 2/3 innings in just his second career start.

The Rays couldn't come back in a 5-1 loss in San Diego, their homer-happy lineup limited to just three hits by a sublime collective pitching performance from the Yankees.

But just as New York almost certainly regretted using an opener in Game 2 when Deivi Garcia and J.A. Happ both got tagged, the Rays are probably wishing they had simply allowed Ryan Yarbrough to start instead of opening with Thompson, a 28-year-old right-handed reliever appearing in his third career playoff game.

Game 5 is likely to be much less complicated: Although neither manager disclosed his plans for the winner-take-all showdown before Game 4, it seems likely to be a rematch of Game 1 with aces Gerrit Cole and Blake Snell on the mound.

But with a chance to advance to the ALCS for only the second time in franchise history and the first since 2008, Tampa Bay stumbled from the start in Game 4 at Petco Park.

DJ LeMahieu led off the game with a single for New York before Thompson got the next three batters. But Tampa Bay stuck with Thompson in the second inning, and the Yankees pounced.

Luke Voit led off the second with his first homer of the postseason, and Thompson then walked the bases loaded. Brett Gardner battled for his walk in a nine-pitch at-bat, but Gleyber Torres and Gio Urshela faced only nine combined pitches while drawing their walks.

Thompson struck out Kyle Higashioka, but LeMahieu drove in Gardner easily with a long sacrifice fly. Cash pulled Thompson for Yarbrough, who quelled the threat and pitched smoothly into the sixth inning before Torres' two-run homer put the Rays firmly ahead.

A two-run deficit didn't seem like much against Tampa Bay's powerful lineup. But New York's four pitchers were all tremendously effective - beginning with Jordan Montgomery, who allowed one run in his four-inning start.

Yarbrough covered five efficient innings, which could help the Rays in Game 5. While Yankees relievers Chad Green, Zack Britton and Aroldis Chapman each threw more than 20 pitches, Tampa Bay only used Thompson, Yarbrough and Aaron Slegers. The rest of the Rays' deep, fearsome bullpen should be rested for the series finale.

Tampa Bay introduced the concept of using a reliever to start games in 2018 to offset a string of rotation injuries, and teams across baseball followed its lead. Cash exploited the opportunity to match his high-leverage relievers against the top of an opponent's lineup, and his starters proved able to adjust to arriving late to the mound.

Yet Cash has been reluctant to use an opener in the playoffs: He had done it only once before in Tampa Bay's 11 previous combined playoff games in 2019 and 2020.

Diego Castillo handled the assignment splendidly in Game 4 of last year's division series against Houston, getting three strikeouts while allowing one hit and one walk in 1 2/3 innings before giving way to Yarbrough in the Rays' 4-1 victory.

The Rays used an opener seven times in this year's 60-game regular season, going 6-1 when employing the scheme.