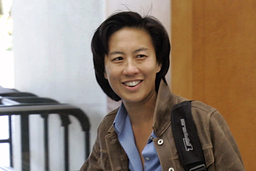 MIAMI (AP) For Kim Ng, the first three weeks as general manager of the Miami Marlins has meant less rest and more coffee.

She has been getting to know colleagues at work, contacting agents and other teams, and learning as much as she can about the 150 or so players in the Marlins organization.

''Let's call it a crash course,'' Ng said with a smile. ''I got to sleep in until 5:30 this morning, so I'm doing pretty good. Not a big coffee drinker, but I've had to dip in there a bit these past couple of weeks. My husband has been really great making sure I'm eating three times a day.''

Having a husband in a supporting role is a reminder Ng is the first female general manager in major league history. That milestone wasn't mentioned once during her 30-minute news conference Thursday, a sign of how quickly a breakthrough can become part of the norm.

Instead, Ng's comments focused on efforts to build on the Marlins' recent progress as CEO Derek Jeter's ownership group begins Year 4 of a franchise revival.

This year the Marlins reached the playoffs for the first time since 2003. A rebuilt farm system ranked among baseball's best began to bear fruit, and an abundance of prospects has the organization enthusiastic about 2021.

After three weeks studying video and talking with Marlins scouts, Ng shares in the optimism about the foundation built by Jeter and his group.

''They are ahead of the game,'' Ng said. ''It takes a really, really long time to build a farm system of this quality and caliber. That's the most exciting thing about all of this, and making sure we as a front office are doing everything we can to help in their development.''

Heading into next week's winter meetings, which will be held virtually, the Marlins' priorities include upgrading the bullpen and adding a veteran bat, Ng said. But improvement can also come from within, she said, because so many prospects are on the cusp of major league success.

''If just one of those guys lives up to their potential that we haven't seen yet, that would be a huge impact on our club,'' Ng said.

The Marlins likely won't be too busy in the free agent market, because they don't want veterans clogging competition.

''Whenever we can give a prospect a chance to play, we really would like to do that,'' Ng said. ''The quicker they come along and develop, the better off we're going to be as a club for a long time.''

One veteran who could be part of the long-term plans is third baseman Brian Anderson, who is heading into his fifth season with the Marlins. He's unlikely to receive a long-term contract offer this winter, however, in part because the team has a new GM.

''I personally would like to see how this year goes before we venture down that road,'' Ng said, ''so I have a better understanding of who he is as a player, and I get a better sense of the situation.''